Before & After: Downstairs bathroom & laundry

A while back, Facebook’s memories showed me the first pictures we took of our house, back in 2007. I posted something about how much it has changed, and a number of people commented that I should post the before and after.

You know those projects you don’t mean to get involved with, but they just kind of happen to you? Our downstairs bathroom was one of those.

We were hard at work on that east bedroom project, also pretty close to completion on the Silas existing project, and … the tub in the downstairs bathroom started to leak. I apparently don’t have a “before” picture of this tub, but suffice to say, it was one of those fiberglass tub-shower surround things. I believe the color was “avocado.”

This was distressing, to say the least. We did not have TIME to do another serious renovation project. But we also didn’t have a choice, because I was pregnant, it was July, and I definitely needed a working shower.

Fortunately, we already had a tub that just needed to be installed. JC’s family had offered us the tub from his great-grandmother’s house in Parkersburg, when they tore the place down. It is an old clawfoot tub, and it had about seven layers of paint on it. His mom and sister had driven it over the mountains in their Kia Sportage, and it had been living in our yard for a couple of years, maybe?

We had powerwashed all the old paint off and used automotive primer and paint to repaint the outside of it. The porcelain inside, thank goodness, was in good shape.

We found a contractor to help us with the renovation–plumbing is not our strong suit. To save money, we decided that we would do the demolition and then the contractor would come in and do the rebuilding.

So one night, JC’s D&D buddies earned a little extra experience by taking a Sawzall and a sledgehammer to the old tub and getting it out of the bathroom one chunk at a time. We also took out the other fixtures, the vanity, and all that masonite. My dad helped us move the wall for the tub alcove to buy another inch or two. We had bare studs, subfloor, a hole where the toilet should be. I called the contractor and left a message. Days went by. I left another message. More days. He never did return my call.

Desperate, I asked around and found another contractor, Sam. He and his people are TOP NOTCH. Sam and his team have done all of the work on our house that isn’t DIY. In hindsight, I’m kind of glad that other guy ditched us, because otherwise I would never have met Sam. My eight-months-pregnant-without-a-functioning-downstairs-bathroom self was not able to see this silver lining at the time…

Sam’s crew leveled the floor and laid the tile. I grouted it. A plumber we knew came and installed a drain under the tub so that we don’t have to have one of those annoying circular curtain rods. A church friend is an electrician, and he came to help us add a light in the tub alcove. I replaced all the light fixtures with exterior ones; I just liked the look of them. We put in a new fan. 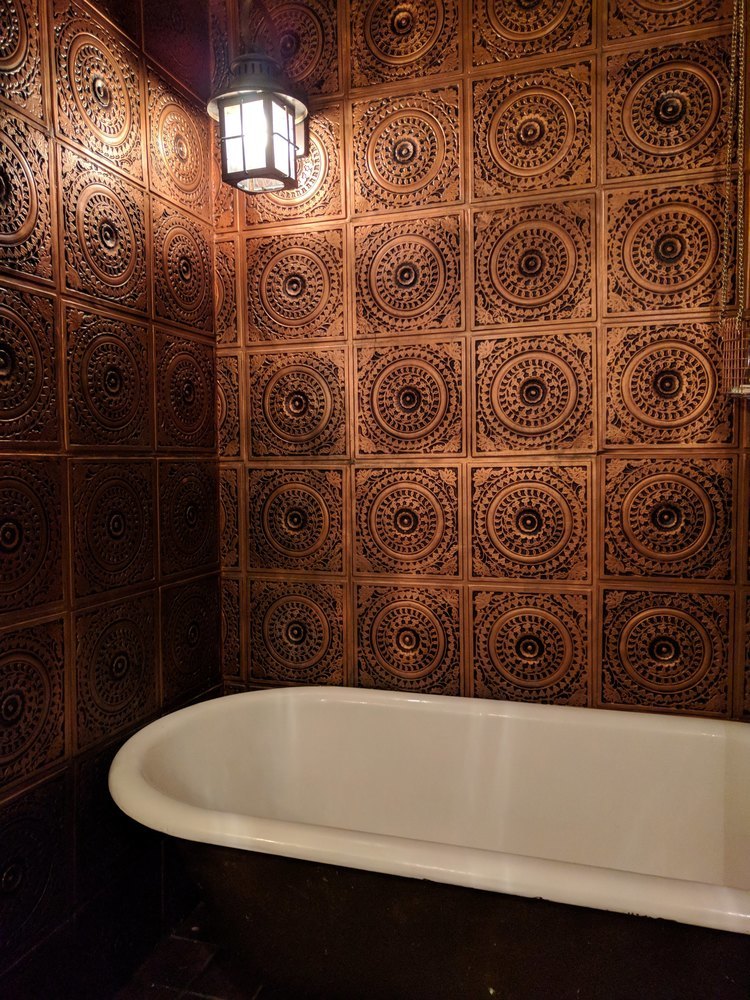 JC and I hung the drywall, I mudded and sanded and painted it. We found these tiles that look like pressed copper, but are actually made from recycled plastic. We hung those in the tub alcove.

We bought a washstand from a flea market, fitted it with a bowl sink, and made it into a vanity. 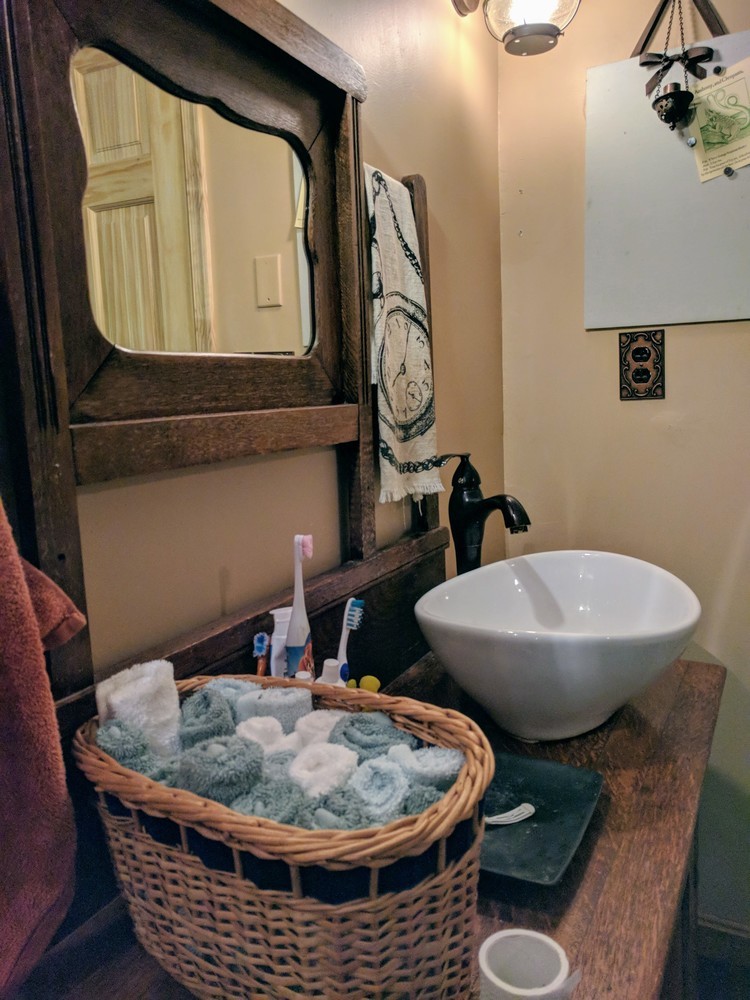 We did the tile and drywall into the adjoining laundry room, and even found a spot for the painting I rescued from my granny’s basement years ago. My mom made it when she was a teenager in New York. It looks like a Shenandoah sunrise to me. 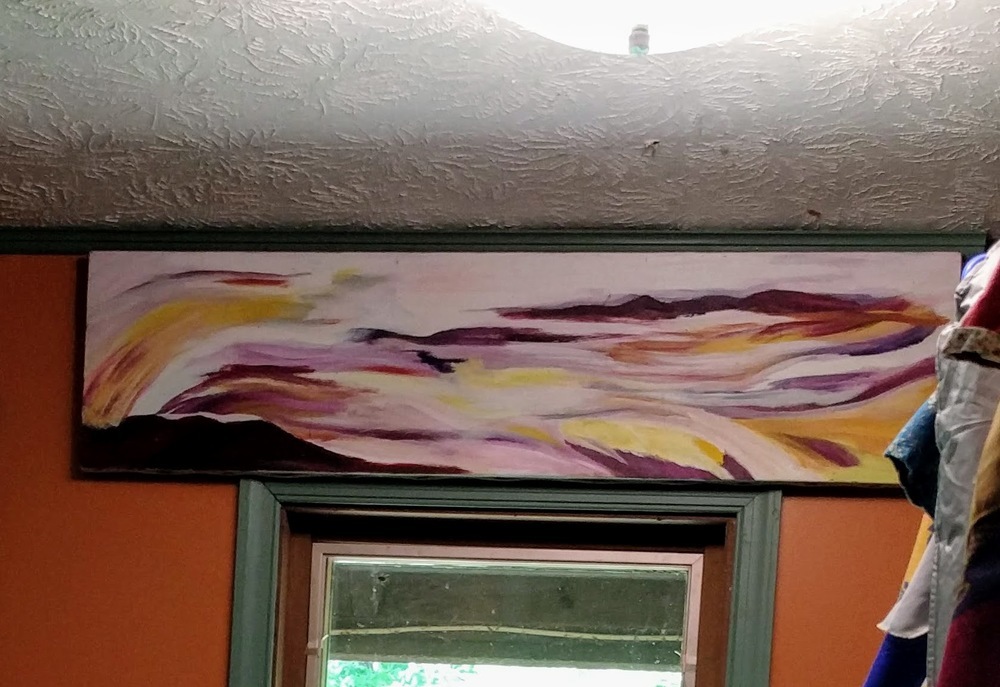 After literally years of issues with the bathroom door (our incompetence + a cheap luan door + small children = a total disaster), our awesome Christmas present last year was my mom and Gary offering to pay for a new door AND the cost of having a for-real carpenter install it correctly. 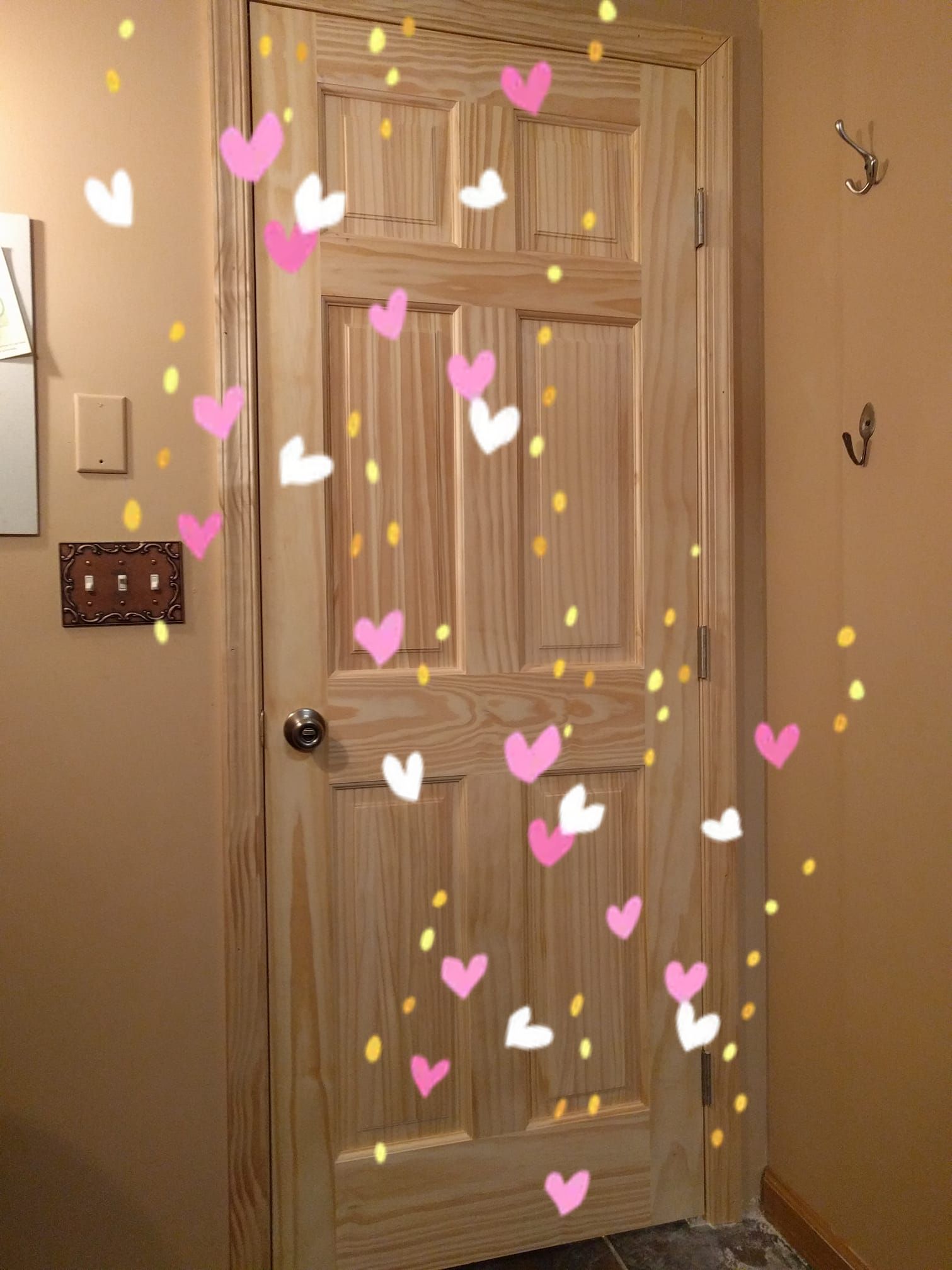 We still have a few things to do–or re-do–in this bathroom. The plastic tiles are more fragile than we had realized, and we need to replace a few that have broken over the years. It’s probably time to reseal the grout. We still need to stain the new door and fix a bit of trim on one side of it. It’s time to put in a proper TP holder; Silas ripped the old one out of the wall when he was a baby, and at the time, we couldn’t see the point in replacing it. He’s big enough now, though, to be trusted with that sort of convenience. 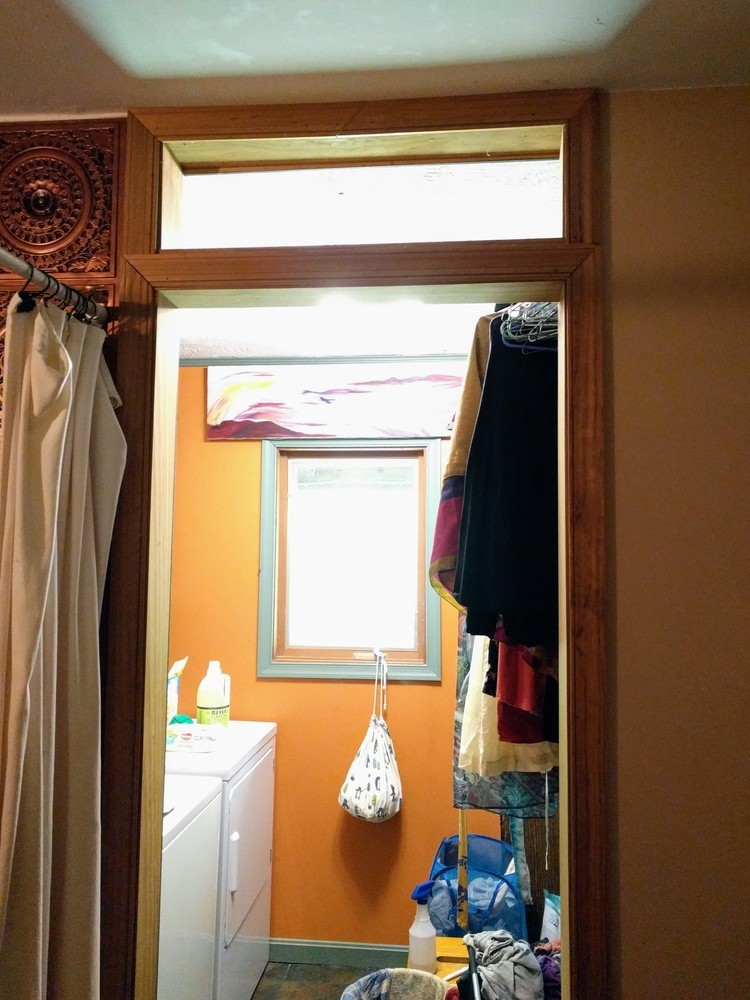 I’m still trying to figure out what, if anything, I want to do with the transom between the bathroom and the laundry. I’m sure I had a big idea about that at some point, but not any more.