Probably the biggest thing going on with Silas right now is that he did a theater class at JMU for homeschooled kids, and he LOVED it. He’s always been interested in theater-making, but he’s been too shy to consider acting. I was shocked when he said he wanted to do it, and bowled over at how excited he was about it.

Here’s what I wrote in a Facebook group where I connect with other moms who work in theater:

Simple joys–my 7-year-old son, who somehow manages to be both incredibly dramatic and incredibly shy, took his first theater class today. It was at one of the local universities (it’s taught by theater education majors). It was in a place he’s seen plays, but a part of the building he’s never visited. He’s homeschooled and other than Sunday school, he has rarely taken any formal classes. He even refuses to do swim lessons! I was very surprised when he said he wanted to try this class. He didn’t know anyone else in the group. He was among the youngest (official age range is 7-12, but I didn’t see anyone under 10 when I dropped him off). I wasn’t there because I had to take his sister to dance class.

Mamas, he *killed it*. He was so excited he could not stop talking about it. He knew not only all the lines he had in their short scene, but also those of everyone else in his group (“Of course I learned it, Mom, we rehearsed it like five times!”). He described all the games they played, in detail, including noting what choices other kids made. I could tell from how he talked about it that he was collaborating really well in his group–he kept saying things like, “I did this, but that was Katie Beth’s idea, and I liked it.”

One of the teachers was super amused that he gave a hearty “Thank you FIVE” in response to a time warning.

He’s typically been very shy about being in front of people. He won’t even agree to read scripture at church, although he’s a fantastic reader and our church is small and friendly. And yet, he eagerly informed me that “the performance at the end is like a REAL PLAY for a lot of people, it’s not just moms and dads, and I’m going to be in it!”

I’m overjoyed to see him so excited and empowered about something he never thought he would do. And especially pleased that he’s learned enough rehearsal etiquette from years of sitting in the corner with his coloring books to behave himself appropriately in this situation.

The class consisted of theater games and improvization around some Shel Silverstein poems. One of the teachers took the kids’ improvs and worked it into a more or less logical script. The kids created set pieces and props, and rehearsed for a couple of weeks. Silas worked hard, he studied his lines, he told everyone he knew about his show (maybe the kid has a career in publicity…). And he did great! He needed to be prompted a time or two, but he just moved on from those moments. He wasn’t upset or embarrassed by it at all. The JMU students did such a great job of creating a situation where the kids were not nervous, they weren’t beating themselves up, they were just having a great time doing a very silly play together. Afterward, we had a potluck and the kids all celebrated their show together. It was such a delightful experience. I couldn’t have asked for a better first play for him.

Homeschooling has been interesting. We’re pretty unschoolish, but I do want him to do SOMETHING besides play LEGOs, just for my own peace of mind. So I started requiring certain things–each day, he has to do a chore, and a bit of reading, writing, and math. He has to do Mandarin at least once a week, and typing games twice a week. Also brush his teeth and that sort of thing. He was having a hard time getting through it, until I made up a schedule for him. He is pretty committed to following his schedule. He loves to tell time–he wears a watch all day–and having made a commitment to start his math at 10:30, he will do it, to the minute (but not at 10:29 obviously). He’s definitely above grade level on reading–interesting, because last year, he was far below grade level, and he just magically made a huge leap last August. For math, he’s about where he should be at the end of second grade. I reviewed the SOLs because I like to check in a couple times per year just to see how we’re matching up with them (as homeschoolers, we’re not required to meet them, but they do give a general idea of what his peers would be doing). He was very amused to find that I rated him as having completed sixth grade theater–there aren’t standards for theater below that! He does very little in the way of formal academics, and he’s at or above all the SOLs for second grade. Knowing that makes me feel fine about continuing our super relaxed homeschooling.

He just started using Rosetta Stone Mandarin. His pronunciation is fantastic! I have to admit to getting a little teary seeing some of those photos again. I worked so hard on that project–it was the best and worst of times, for years. And now my kid is using it! Too wonderful. 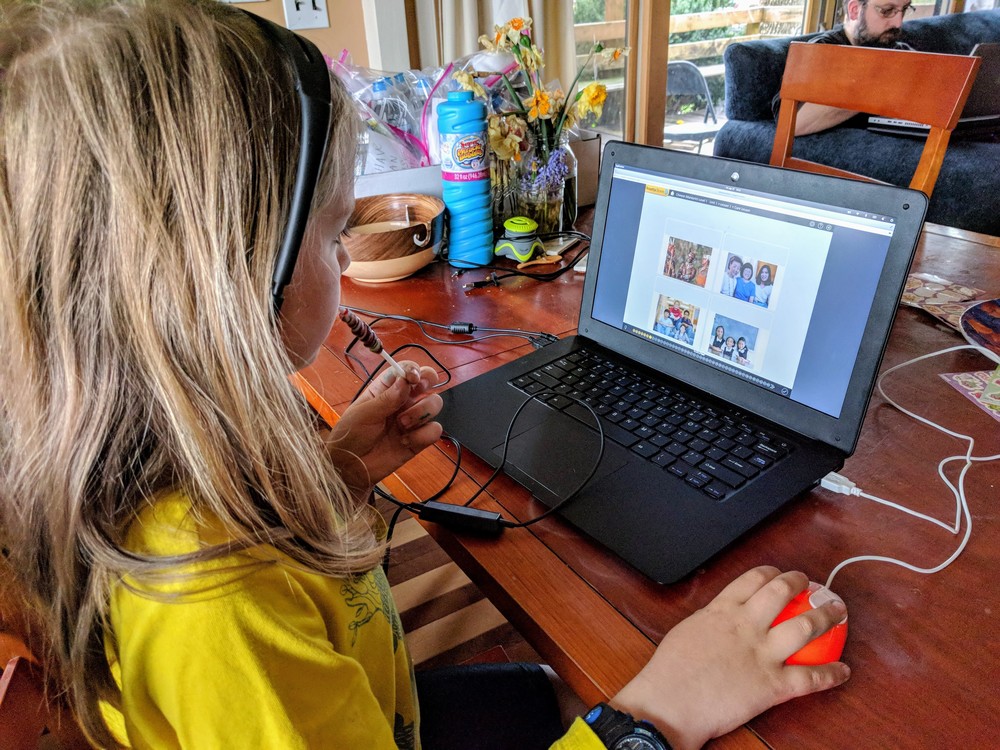 Silas has a bit of computer time to work on typing, Mandarin, programming (Scratch and LOGO), and that sort of thing. I taught him how to order books on the library website and the power went straight to his head. He ordered a whole pile of Hank the Cowdog audio books and started crying when he hit the reserve limit.

Silas’ favorite of the things I require him to do is writing. I let him count writing character sheets or comics. Sometimes I make him write a certain kind of thing, like thank you notes, but mostly he devises his own things…

Here is a sampling. Other items in here include, “I love my love with a _____,” a collection of hymns for our random drawing to sing before dinner, a math sheet with a “boss fight,” some basic textual analysis, character sheets for a game he invented, a shading exercise gone monstrous, and Morse code.

Silas is in an incredibly sweet stage, right now. He’s always giving me hugs or making drawings for me. He is pretty good with little children, if maybe a bit patronizing to them. He’s such a tender guy. I’m enjoying this phase while it lasts! 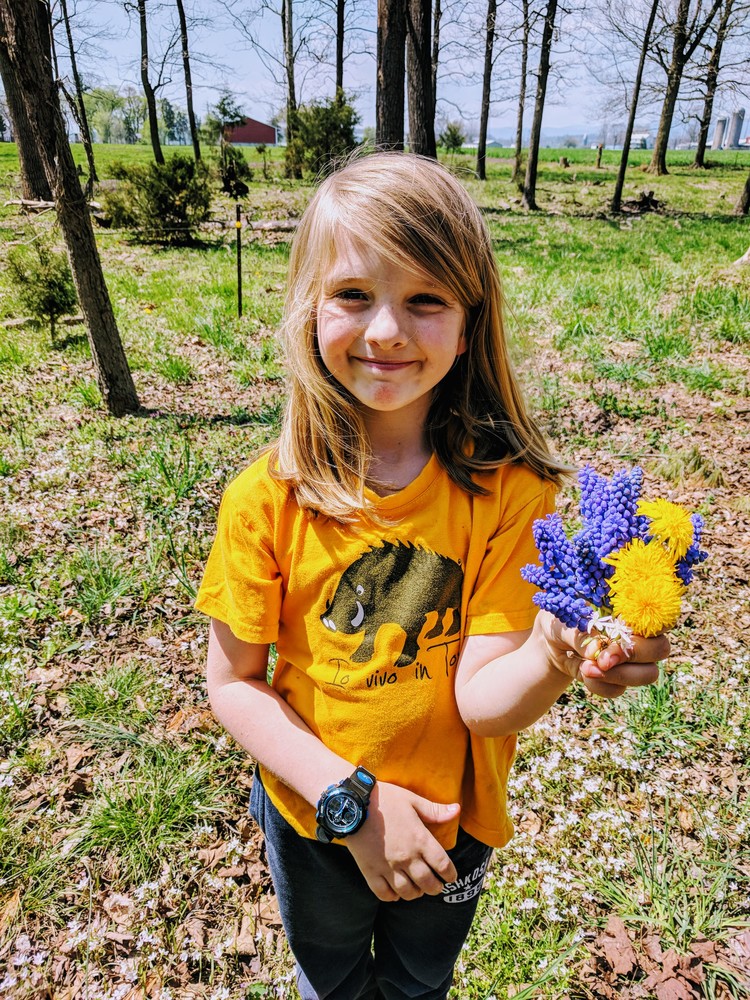 Silas has always enjoyed other kids, and I’m seeing his friendships get more intense in recent months. He’s had some challenges with the other boys in Terrific Tuesday–it’s all of them being so stubborn that they can’t engage with each other’s ideas. This has been ongoing for months, but I’m cautiously optimistic. He’s gotten a lot of great practice collaborating in his theater class, which is awesome. The other day, I heard Silas say to them, “Guys, my mom taught me this thing from theater, which is that the first rule of theater is say Yes AND. That means you listen to everyone’s ideas. Let’s try that.” And yesterday, he told me that he had a better Terrific Tuesday than he had had in a long time. So I hope they’re turning the corner.

One thing they fight over a lot is games–Silas loves to invent “live action  D&D games” and the rest of his friends have gotten really into it, too. They’re very particular about the rules of the game on a given day, and they have big disputes about whether they’re making a world with or without, guns, dragons, magic, or mechs. On the one hand, I get distressed about him being so rigid and not wanting to engage with others’ ideas, but on the other hand, I’m glad he has the time and space to work it out with them, given a little parental sidecoaching.

I’m super impressed, incidentally, with his total mastery of the genre. He’ll tell you the title of one of his games (Shadow of the King, The Mage’s Hand, Dragons of Asteroth), and you’ll think, Did I read that somewhere? The other day, Noah’s dad told me, “So, Noah and I were playing Spirit Guardians the other day. It’s actually a pretty good game.” Until he explained that it was one of Silas’ inventions, I thought maybe it was a board game they’d bought recently or something.

I’m really enjoying having a seven-year-old. I’ve heard from a number of his friends’ parents that their kids kind of chilled out when they hit seven, and that’s been my experience, too. It’s a delightful age…if a little silly! 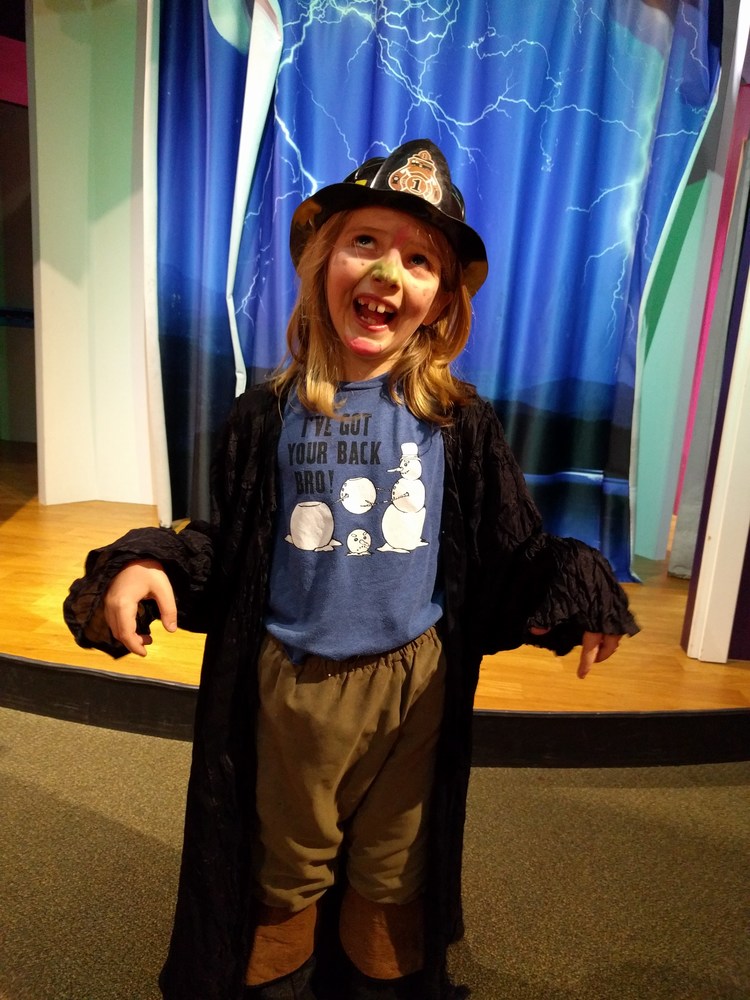