Last summer, Petra learned from the TD on the Brother’s Grimm play that our local cat shelter needed foster families for kittens. And she has been obsessed ever since. When I told her that I didn’t want to because I felt like I would end up fostering the kittens, she stepped up by completely taking over feeding our cat, with few reminders. After realizing that I hadn’t fed Lyra since basically December, I relented.

We put in her application while we were in Michigan, took a brief training session when we got home, and eagerly awaited the beginning of “kitten season.”

The day it was time to pick up our kittens, she started crying and saying she didn’t want to do it after all. Later, she told me she was a little scared it wouldn’t be as good as she had hoped. She got cold feet, poor thing!

But I had already committed to picking up five three-week-old kittens, so I dragged a crying girl into the cat shelter, and the minute she saw their orange, wiggly tails, her tears evaporated. 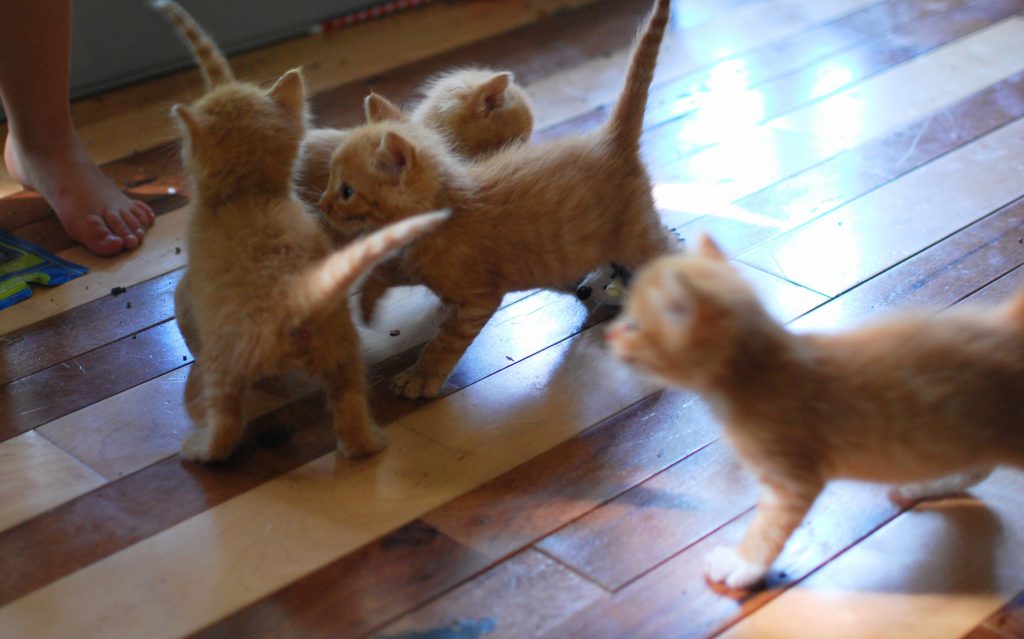 She and Silas have both done very well with the kittens. She named two of them (Helena, Bellina), he named two (Jimmy, Ursula), and JC named the fifth (Honeylemon).

When Jake and Dallas gave us Mirage, he came with a huge cage. They didn’t want it back, so it’s been in our shed for a few months. It turns out to be just right for five kittens. We have their litter box at one end, food in a corner, and hot pad thing in another corner. They seem to be pretty cozy. And they’re already doing a great job of using the litter box!

We’ve had to hand feed them, so JC and I have had to do that (the syringe is tricky to use).

But now, a little over a week in, they are starting to learn how to eat from a bowl and so the kids can help more with that. Among other things, Silas helped me record their weights. He was very excited to use the scale. It’s analog, and I don’t think he can really read it. But he liked writing them down. I hope this counts as homeschooling, because we sure haven’t had time for much non-kitten educational work lately. 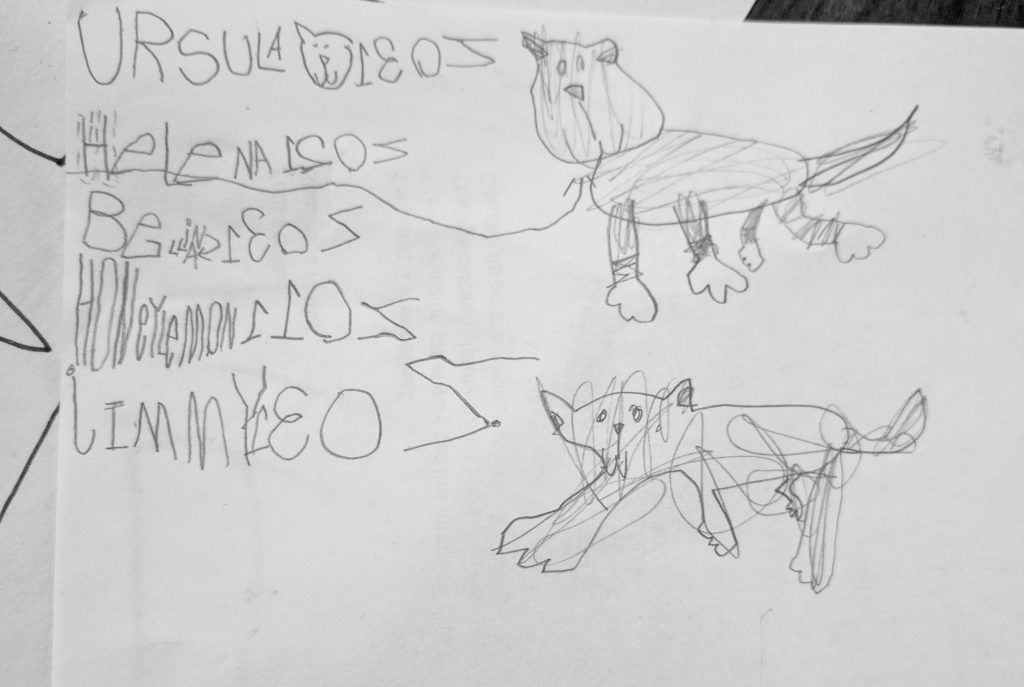 The kittens also are a bit more playful than they were at first. Petra is trying desperately to teach them to enjoy toys. I think they’re catching on.

Petra has kitties on the brain. She asked a face painter at a honey bee festival to put a pink kitty on her cheek. “You know this is a honey bee festival, right?” said the girl, who had clearly been doing bees and bee hives and honey jars all day. “Yes,” said Petra, not blinking. 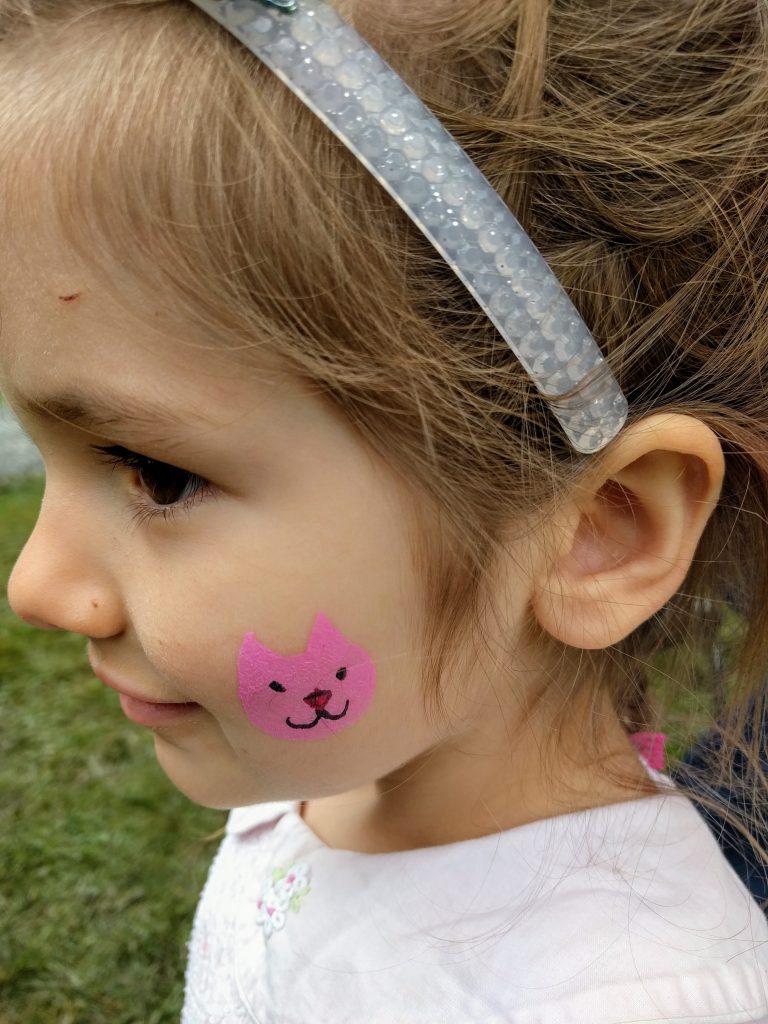 In church this morning, she drew a picture of a “pastor cat giving a sermon” and proudly gave it to our pastor. I think it was her way of saying, “The only way you could be more awesome is if you were a cat.”

I traced their bodies and hung the paper up for them to fill in. Silas did a pretty realistic representation of one of his standard outfits. Petra drew all five kittens on her dress. 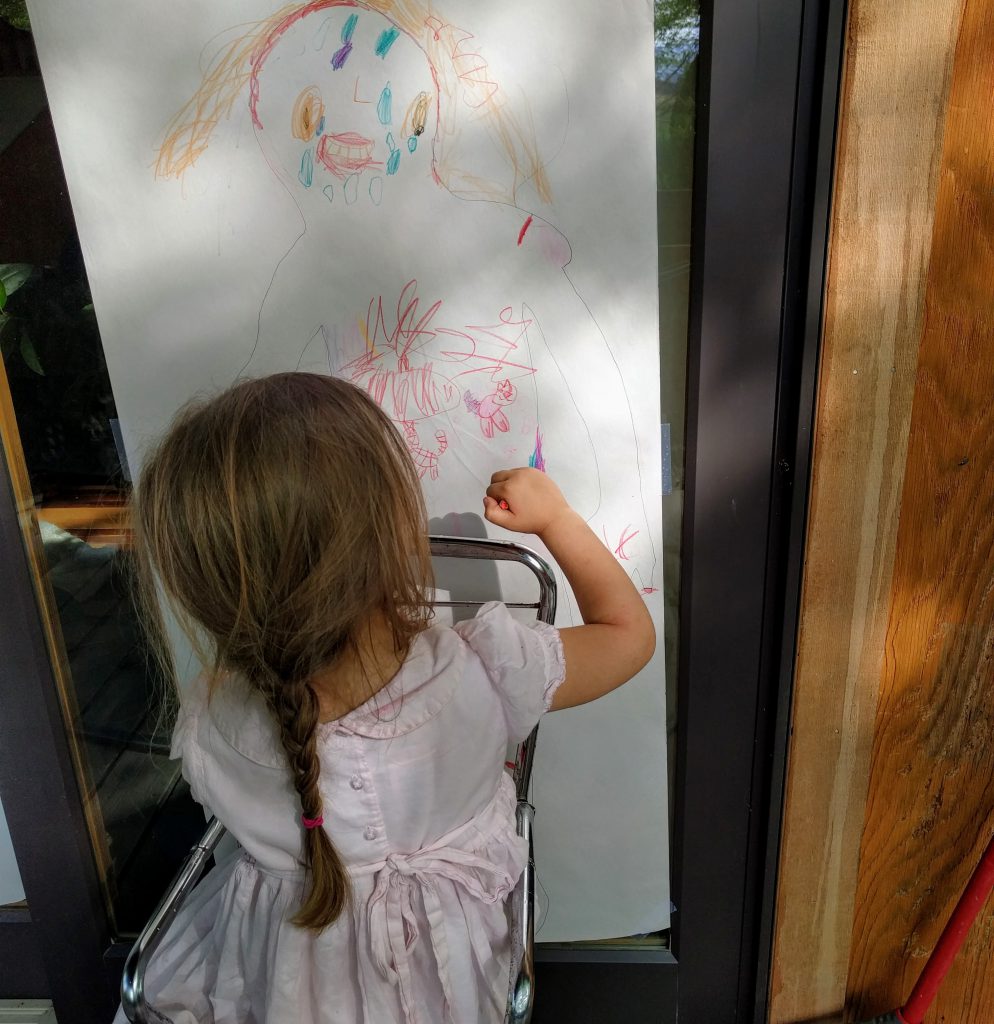 Kids and kittens are hard to photograph. They move quickly and when there is more than one, somebody’s butt is always facing the camera. I think I trashed five pictures for each one I kept. Also, Lyra is studiously ignoring them (and we’re trying to give her extra cuddles).