Year of the Rooster

Due to some random circumstances in the past few years (a blizzard one year, and I believe all of us getting sick the next?), we haven’t been to Chinese New Year in a big city since the Year of the Horse (2014). This year, I decided that we should finally hit the CNY parade in NYC. The kids are finally big enough to know and care what is going on, and stroller-free.

Gary found these gorgeous appliques in Chinatown a couple of weeks earlier and he passed them to me, suggesting that I could come up with something to do with them. I happened to have the kids’ sweatshirts from Halloween (which they have refused to wear ever since), so I sewed the appliques onto them. When I was trying to get the kids out the door to head out on our trip, I told them that they had a present from The Monkey King in the car. They were thrilled and so excited to show them off for their friends (but Petra, about halfway through Saturday, asked, “Are these our Halloween sweatshirts?” Can’t fool that one!).

Conveniently, my friends Virginia and Jake live in NJ, a decent train ride from the city. We made plans to spend two nights with them, doing a local event on Saturday and going to the city for the parade on Sunday. Unfortunately, their daughter woke up sick on Saturday and spent the weekend on the couch with her mama. 🙁 That was sad–we were excited to hang out with them, especially since my kids (who don’t usually warm to kids they don’t know) fell in love with her daughter on sight. They had an amazing time playing together the night we got there, and spent the rest of the weekend worrying about her and asking if she would ever get better.

We made our own fun, though. On the Saturday, we went to a celebration by at a senior center co-produced by the local library and a Chinese American organization. They had performances (three hours worth!), and crafts and prizes and snacks. The place was packed. In addition to the kinds of performances I would have expected, they had a master paper cutter (who did amazing paper cutting completely freehand, without drawing anything at all) and a short tai chi session.

The next day, we took the train into the city. I was a little nervous, as I hadn’t spent any time in New York in years, and I knew it would be crowded, and it had been ages since we’d even done DC with the kids. But it was *awesome*. They were amazing. 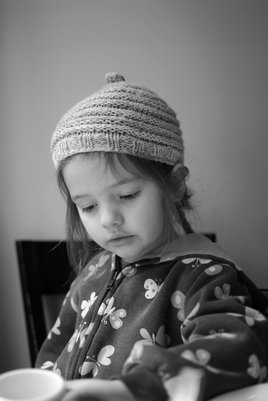 The weather was a little cold, but not bad; Chinatown was crowded, but the crowd was friendly. We had dim sum at a restaurant right on the parade route, and the kids actually ate.

Looking out the window (we were right at the window!), we could see people staking out their spots for the parade and buying confetti cannons and silly string.

Silas spent the last of his Christmas money on a lion (as in the lion dance) marionette. 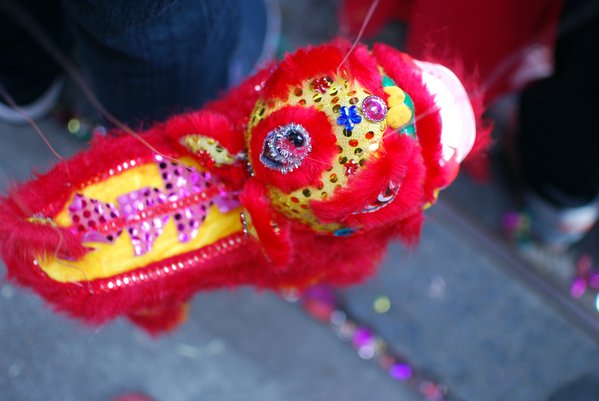 I couldn’t get over how many people from the press were there. I shouldn’t have been surprised, but at the DC CNY parade, there are basically no press people at all.

The crowd and the parade marchers included people from every race and ethnicity. Possibly this was part of what made it feel so safe and welcoming–no one was clearly out of place, or we all were.

Senator Chuck Schumer was marching in the parade. He had a bullhorn, and every few feet, he stopped and said a few things to the crowd. First, he adorably attempted to say “Happy New Year” in Mandarin. Then he said, “How about a shout for our immigrants?” A scream from the crowd. “Wherever you are from–If you’re from China, or Latin America, or the Middle East, or the whole world, we are glad you are here. You are what makes America great!” People screamed until he was out of earshot. I hadn’t given him much of a thought before, but I admired Chuck Schumer right then. 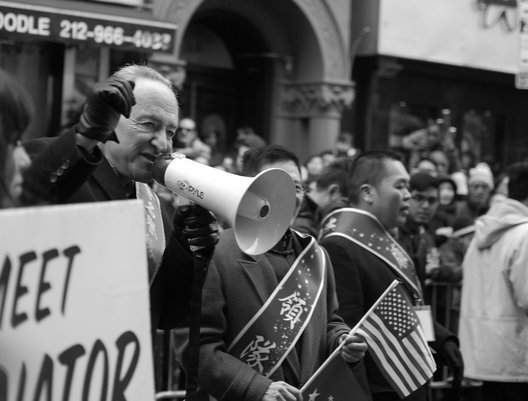 A woman tapped my shoulder at one point and asked if I could make some space for her sons to get close to the front and see. There wasn’t any space right by me, but I was able to ask some college girls just down from me if they could move back to make room for the boys. The mom was overly happy about it and thanked me every time I glanced her way. She was wearing a hijab, and I had the feeling that she didn’t expect me to help her. Something about this makes me feel uncomfortable, and I couldn’t quite put my finger on it. Lynlee hit it exactly, when I told her about it later–it’s sad that the bar is so low, that the tensions are so extreme that a Muslim woman wouldn’t expect a non-Muslim woman to do the tiniest thing to help. 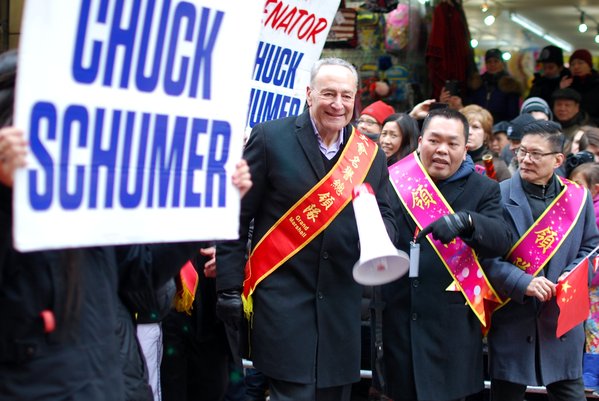 The parade included seven big lion dance groups, plus a bunch of kid lion dancers, plus several dragons. The kids got to pet the first lion, which was exciting for them–at the DC parade, a lion licked Silas, and he still remembers it, three years later.

Beyond that, confetti everywhere! We all had it all over our hair and stuck to our sweaters.

The sanitation workers marched through right behind the NYPD, and got a bigger cheer (and this was before the confetti got going). They sure had their work cut out for them. 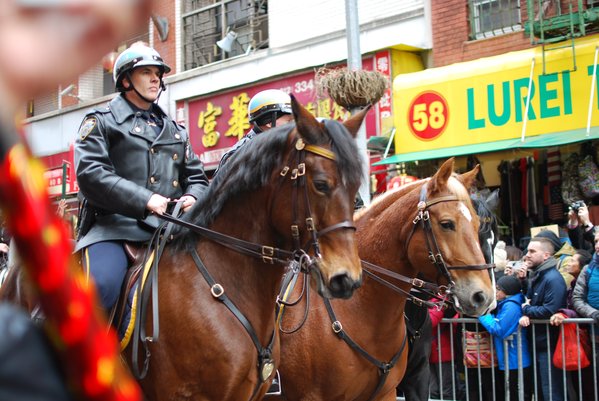 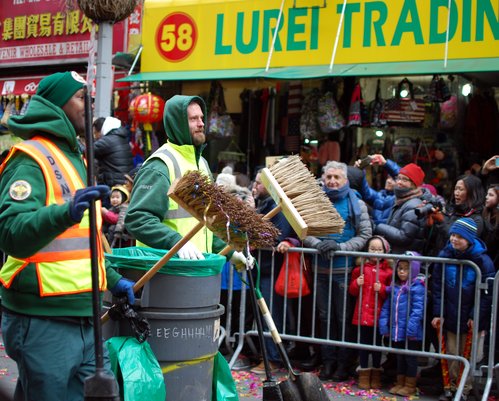 I never get especially into January 1 New Year. I don’t stay up until midnight and haven’t in years. I sometimes make a resolution or reflect on the year past, but it’s not a big celebration. Chinese New Year, with the dragons and fire crackers and jaozi is my New Year celebration. For me, it’s a reminder always of where we’re headed, of moving forward into our future.

Every year, it’s when I start to wonder what is around the corner. 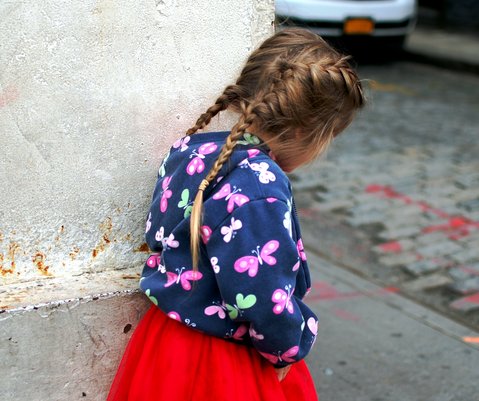