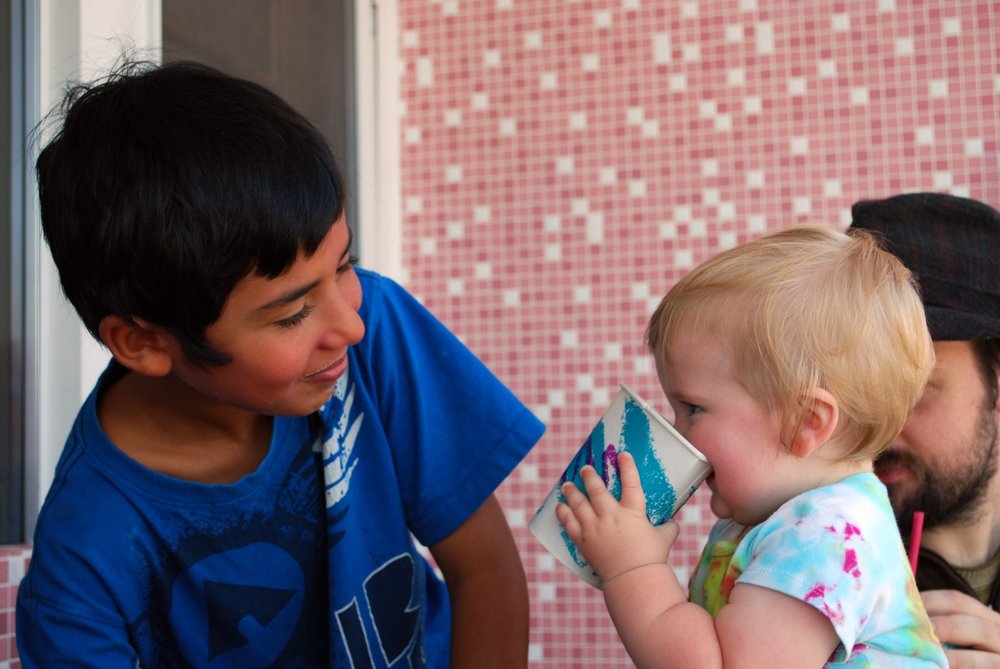 JC and I mentor a boy through Big Brothers/Big Sisters. We’ve been paired with him since the fall of 2009–three years now. Carlos is a real sweetheart, and it’s been  joy for us to be part of his life. It’s been neat to see him grow and change in these years. The development from a first grader to a fourth grader is huge! We’ve seen him develop (some) patience, become a reader, and learn compassion.

We’ve certainly shown Carlos another way of living. He is fascinated with our ongoing poultry efforts. He loves the fact that we make popcorn on the stovetop, instead of in the microwave. He thinks it’s weird that we don’t have soda around the house, but he’s learned that water is fine. He’s stopped asking to play video games, and looks totally insulted when we suggest it.

Probably the most interesting and surprising thing about our relationship with Carlos is how deeply he connects with Silas. We found out that I was pregnant only a few months into our match, and we worried that this would be a problem. We waited a while to tell him, and when we did, we were quick to assure him that he would still be our Little, no matter what happened in our lives. In an inspired moment, we said, “Our baby doesn’t have any older siblings. Will you be the baby’s big brother?”

I’m glad we put it that way, because it gave him a way to understand his relationship with this new person in our lives. Carlos is the youngest of three; he isn’t anyone’s big brother. I’ve enjoyed watching him learn that role. It was funny, at first, because he hadn’t ever really seen a baby develop into a little kid before. He kept asking us, “Does Silas walk yet?” Sometimes we can’t do certain things together (or only JC or I can go, not both of us) because it would be dangerous for Silas. Sometimes Silas takes a fuss and screams the whole way to where ever we’re going.

Silas is starting to learn about being a little brother, too, and I hope it will help him empathize with his new little sibling. He sees Carlos do things, and has to accept the fact that he’s too little. Sometimes, he has to cope with a bit of boredom when we do something that is really outside of his age range (like when we went to see the third Diary of a Wimpy Kid movie; ok, I was bored too). Sometimes Carlos has the same experience, like when we went to see The Velveteen Rabbit at a local children’s theater. Both of them are learning to manage their behavior, to take someone else’s needs into consideration, to wait their turn. It helps that they totally adore each other. Love does cover a multitude of sins.

I know that lots of people decide not to participate in mentoring programs if they have their own children. We’re all busy, and having children of our own increases our obligations. It’s easy, too, to worry that the differences between how we treat and raise our children and how our mentee lives will be painfully obvious. We’ve discovered that this fear is unfounded, particularly when the age difference is so significant. Carlos is eight years older than Silas. I don’t think he has any way to compare his toddlerhood with Silas’. He doesn’t covet Silas’ toys; if anything, he pities Silas because we don’t have cable TV. He does really love Silas’ room, and, on more than one occasion, has said that he wished it was his–but he says that in the same way that he used to say he wished he had a house like ours, outside of the city. Not as a request, or even something he feels entitled to. More like, “That would be nice.” 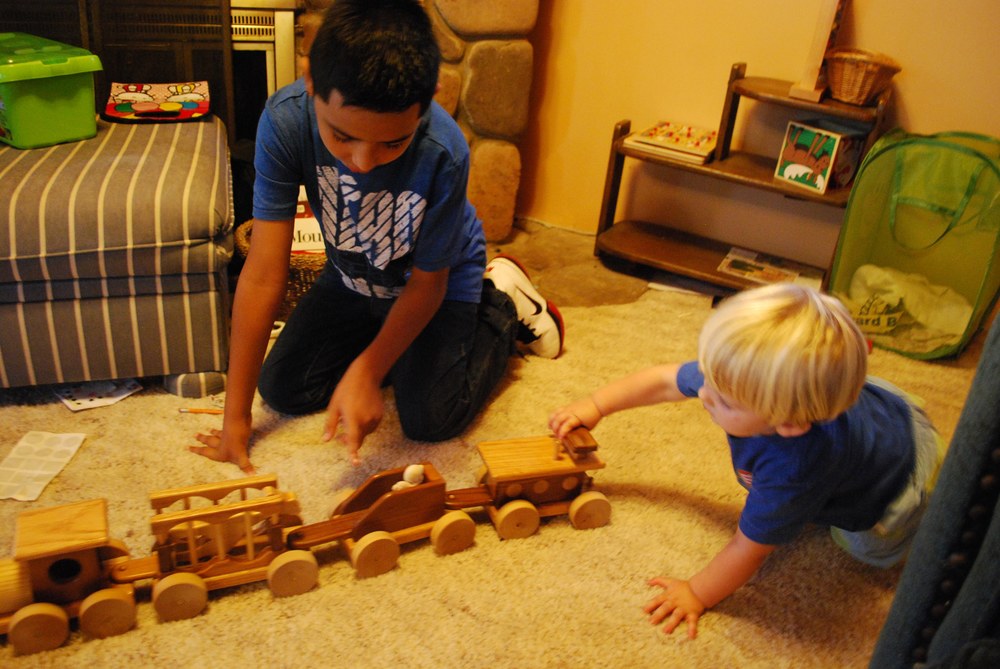 It does help that, although his home situation is a little difficult (he has a single mom), he’s not abused or anything like that. He and his mom are very close. He doesn’t want Silas’ mom. He has his own. He also seems to realize that we all have enough love for everyone. He told my mom that he thinks of her as his grandma, because his real grandma lives in Mexico, and he hasn’t even met her. I think my mom was flattered. If anything, Silas is jealous–not of Carlos himself, but of his family. He doesn’t understand why Carlos has to go home!

He’s excited about the baby, and about having another “little sibling.” We’re excited, too–excited to see him grow another relationship with another little person in our family.