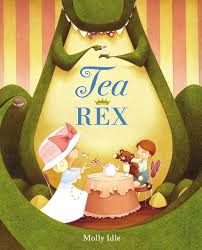 About a year back, a wonderful person (sorry, I don’t remember who! Identify yourself!) sent Petra a copy of Tea Rex, by Molly Idle. We both loved this story of a sister and brother who invite dinosaurs to tea (hilarity ensues). At that time, I decided I really, REALLY wanted her to have a tea rex party for her sixth birthday. But you know Petra (or maybe you don’t; she’s basically an amalgam of me and her aunt Kassi, which is to say, stubborn squared). It had to be her idea. So I was just kind of…subtly dropping it here and there. By June, she still hadn’t bitten and I was about to despair.

You may recall, if you’ve been around here for a while, that my Granny found this massive triceratops at a thrift store and insisted on buying it for my kids. At the time, I was able to convince them that there was no way we’d be able to get Gargoyle the Triceratops home, so he needed to live at Grammy’s house. But come July, as Petra was starting to chatter on about having a Hatchimals birthday party or some such nonsense, I finally bit the bullet.

“You know,” I said, “if you did–not that you ever would, but just in case, I thought of this idea–if you did want to have a tea rex party, I guess we’d have to ask Grammy to bring Gargoyle down for it.”

AND SUDDENLY SHE WAS SO IN LOVE WITH THIS TEA REX PARTY, PEOPLE.

JC and I had a lot of fun planning this party, starting with the invitation design. We like collaborating on things together. 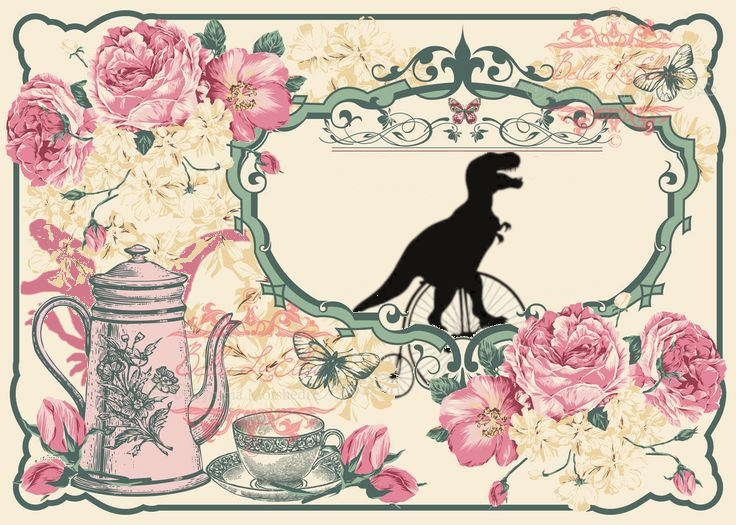 Gargoyle is huge, and hard to fit in a car, but I thought surely in my step-dad’s station wagon….

What I wouldn’t give to know what people they passed on I-81 were thinking when they saw this!

My jaw dropped when I looked up from prepping the food table and saw that dinosaur rolling down the driveway. It looked like they had gotten lost from a weird parade. But no, just an ordinary day at Trial & Error Farm.

The kids, ALL of them, spent a lot of time demanding that we take their pictures on Gargoyle. SO CUTE. Petra also brought out Gremlin, her smaller, yet still huge, triceratops that my brother got her for Christmas. “He needs his friend in the pictures!” she said.

Another piece of the decor that was very important to Petra was that she wanted to make up a display of all of her fossils. She wrote the labels herself. I have to admit, I’m ridiculously proud of this detail. She did such a great job arranging all of them and identifying and grouping them.

I bought bunches of tea cups from the thrift store and modpodged dinosaur stickers among the flowers. I was really happy with how they came out, and each child got one to take home as a party favor. 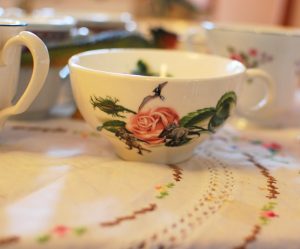 Lillian contributed this tiny fairy garden she made with a friend. 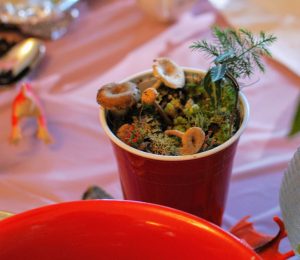 And, of course, we had dinosaurs stalking the table, hiding in the shrubbery, and lurking in the flowers. Luckily, we have an extensive collection of them…

Peter said, “I don’t exactly get the pink balloons and the tea cups…and the dinosaurs.”

I gestured to my shirt, which I borrowed from Katie. “TEA REX.”

Peter just laughed so hard he could barely talk. “Oh, it was written right there on your shiiiiiirtttt.”

Yep, even I was part of the decoration. It was quite a party.