As the holiday dust settles, I wanted to share some of the best gifts we gave and received, because ideas! Some of these are affiliate links, most are not.

We love gifts that make the world a better place.

As featured on NPR, a group of Harrisonburg area churches, led by Immanuel Mennonite Church, started delivering these signs of welcome and love to our neighbors.

I didn’t see many of those in Winchester, so we got one for the city’s unofficial welcome committee. You can get one, too, at Immanuel’s website. 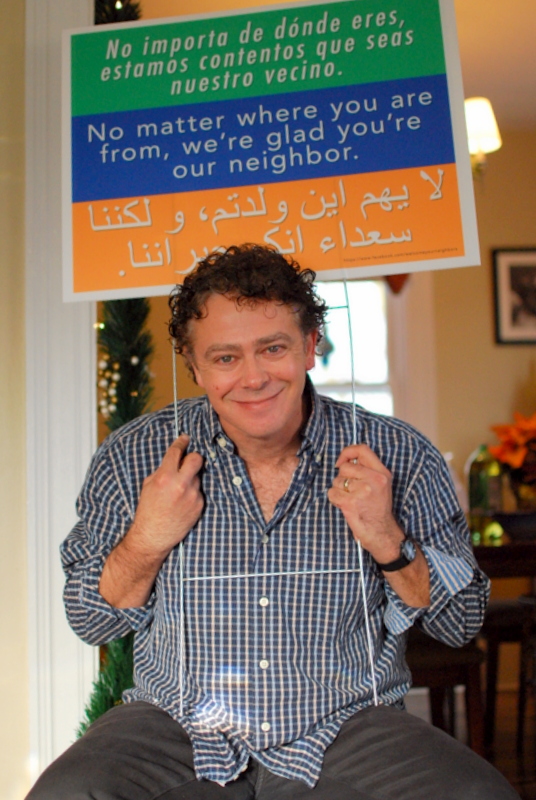 Another fun one is the animals we got for JJ, Elora, Silas, and Petra from Cuddle + Kind. They employ fairly paid artisans to knit these cute little animals and the profit goes to feed hungry kids. I think it’s normally 10 meals per doll, but they were running a special when I ordered that made it 20 meals. We got little cats for the toddlers and large foxes for our kids. Petra noted that the large animals are a little too large, but I think they’ve grown on her.

Katie reports that Elora has started taking her kitty to bed with her. 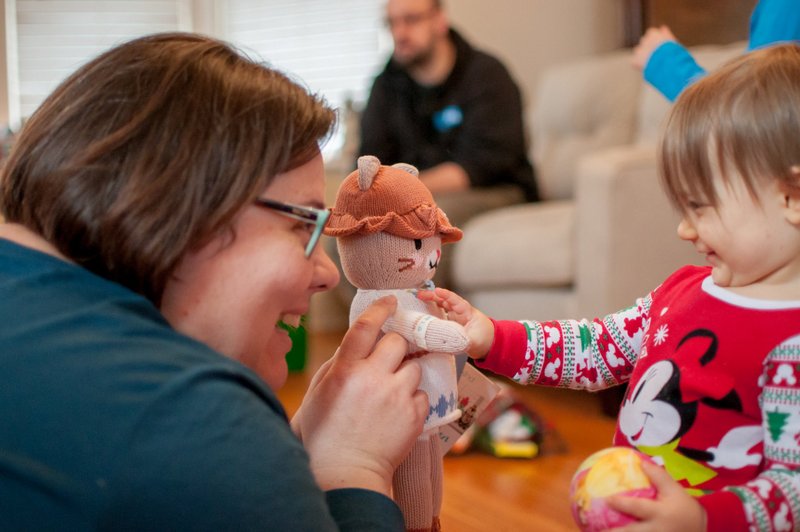 My mom very occasionally has this problem where she can’t find her phone, keys, wallet, glasses…stuff like that.

So I got her Tile, and I have to say, we’re all very impressed. It comes with a phone app that lets her find where she left things, make them ring, make her phone ring if she has a Tile, and lets Gary find all her stuff, too. The only problem is that I got her a 4-pack, and she probably needed a dozen!

Last year, when we were in Michigan, one frustration was that the kids could only video chat with JC when I was available to facilitate it (and JC was available to chat). I found myself saying to people, “I wish they had voicemail for kids!” I didn’t want them to have a phone as such, but just a way to send messages to people independently from me.

Enter the Talkie, from Toymail.

We’re in love with this. And you know I’m not a “tech toy” person at all. Our kids have basically nothing that lights up or talks. But oh the Talkie. We adore it. The kids can send and receive messages with anyone we approve. It’s the greatest. It’s fun and easy to use.

Gifts that are relevant to one’s interests.

Silas, of course, got loads of Pokemon stuff, which was all he wanted. He’s also really enjoyed his LEGO things, especially his first Legends of Chima set. 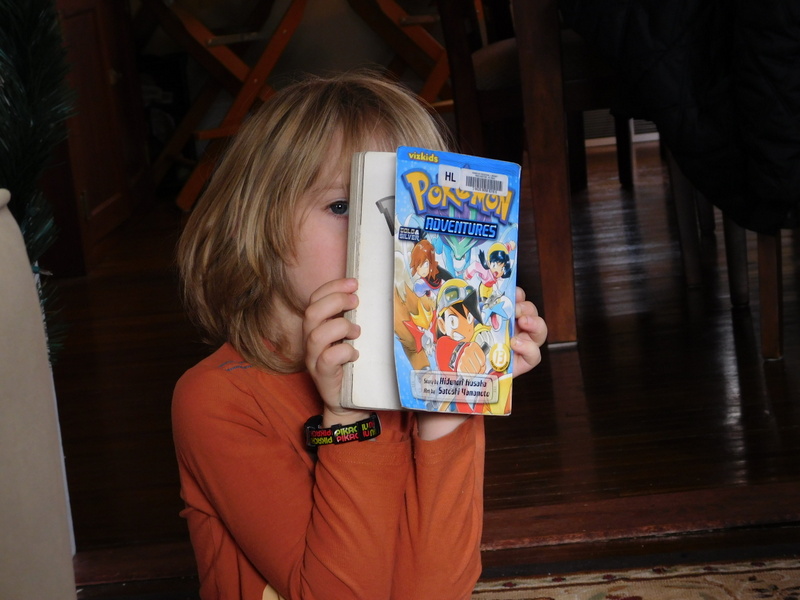 I told JC’s sister that Petra is super intrigued by science lately, and she put together an awesome “kitchen science” kit. It has a pamphlet of different science experiments to do with stuff you might have around the house (which I think she assembled from Pinterest), and she gathered up the various components for many of the experiments, along with goggles, a magnifying glass, and a tiny lab coat. Petra is thrilled, and she asks me every day, “Can we do science now?” Silas got a prepackaged science kit as well, and he likes it, but not as much as Petra does.

The other day, Petra was throwing a fit because I wouldn’t let her have YET ANOTHER clementine. I told her that I was worried that six clementines in a few hours would make her tummy hurt because it would be too much acidity. She thought for a moment and then said, “Can I have a glass of milk? That’s a base because it turned the cabbage juice blue.” Uhm. Yes.

Katie drew Kassi’s name in the gift exchange. She got her some hand-painted TOMS with scenes from Tangled, ordered from etsy. I don’t have a link to the shoes themselves, but here’s Kassi’s face when Katie showed her the picture (she had to wait a bit to get the object in her hand). 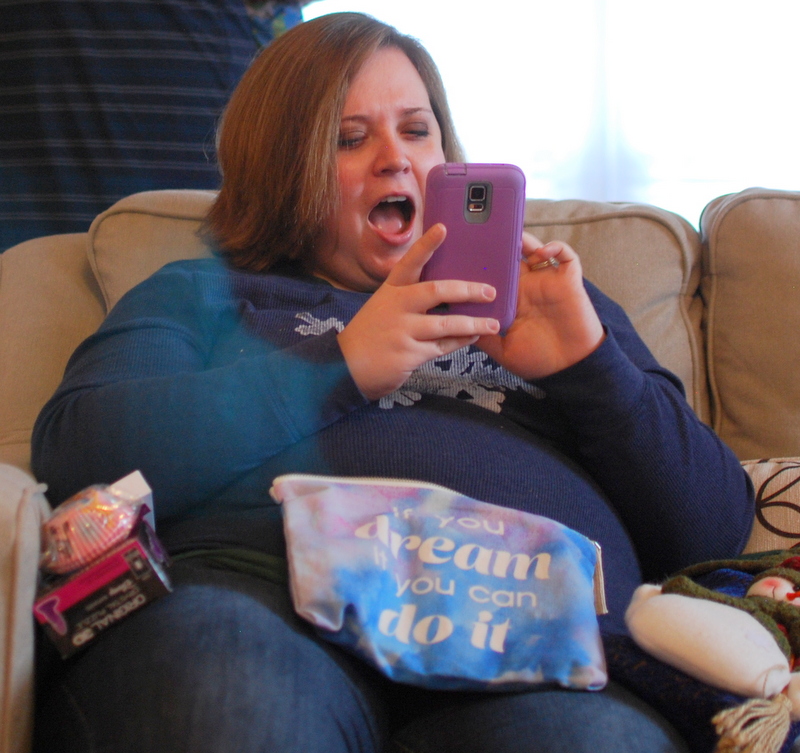 Kassi drew my name, and she got me a bunch of adorable things, too, including this knitting narwhales print and these adorable botanical earrings that I can’t stop wearing (but apparently can’t find the link to right now. Will post later)!

Silas made this picture.

I added the title.

(Silas says that the animal/monster rolled around in the dust and that’s dust falling off of its tail. Not poop or farts. Really, what’s wrong with you, mom?)

Gifts that are a long time coming.

JC and I both lost our wedding rings in the chaos of Silas’ first year of life.

This year being a “power year” (10 years of marriage, 20 years since we started dating), we decided it was a good year to replace them. We put it off so long that I am basically considering these our Christmas gifts to each other. We went out on Black Friday while my mom and Gary watched the kids. I picked out a vintage band at James McHone, but we had a much harder time finding something for JC in our price range (this is partly because gold is sold by weight and his hands are huge. Also there are way fewer options for men in vintage jewelry). He was worried about spending real money on something and losing it! Then I had the idea of trying to find someone who could make a ring similar to mine, but in stainless steel. We found a cool etsy shop that said they’d be happy to work with us, and they have been great so far (still waiting for the ring to come in). Happy anniversary/Christmas to us! 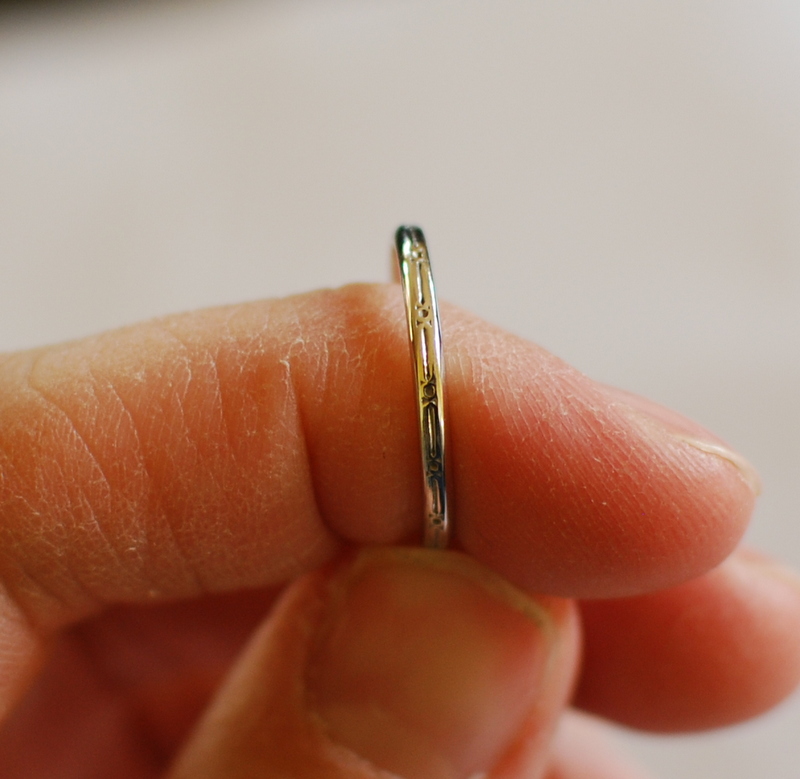 Gifts you pick out yourself.

I love it when someone picks out a gift for me that is just perfect and surprising and delightful. And yet, there is something to be said for someone just telling you, “Here’s some money, go spend it on something for you, not the electric bill, not something you feel like you should buy.”

And that’s how my granny ended up getting me these sweet Inkkas sneakers (they’re made sustainably and they plant a tree for every pair they sell, and also so comfy!). 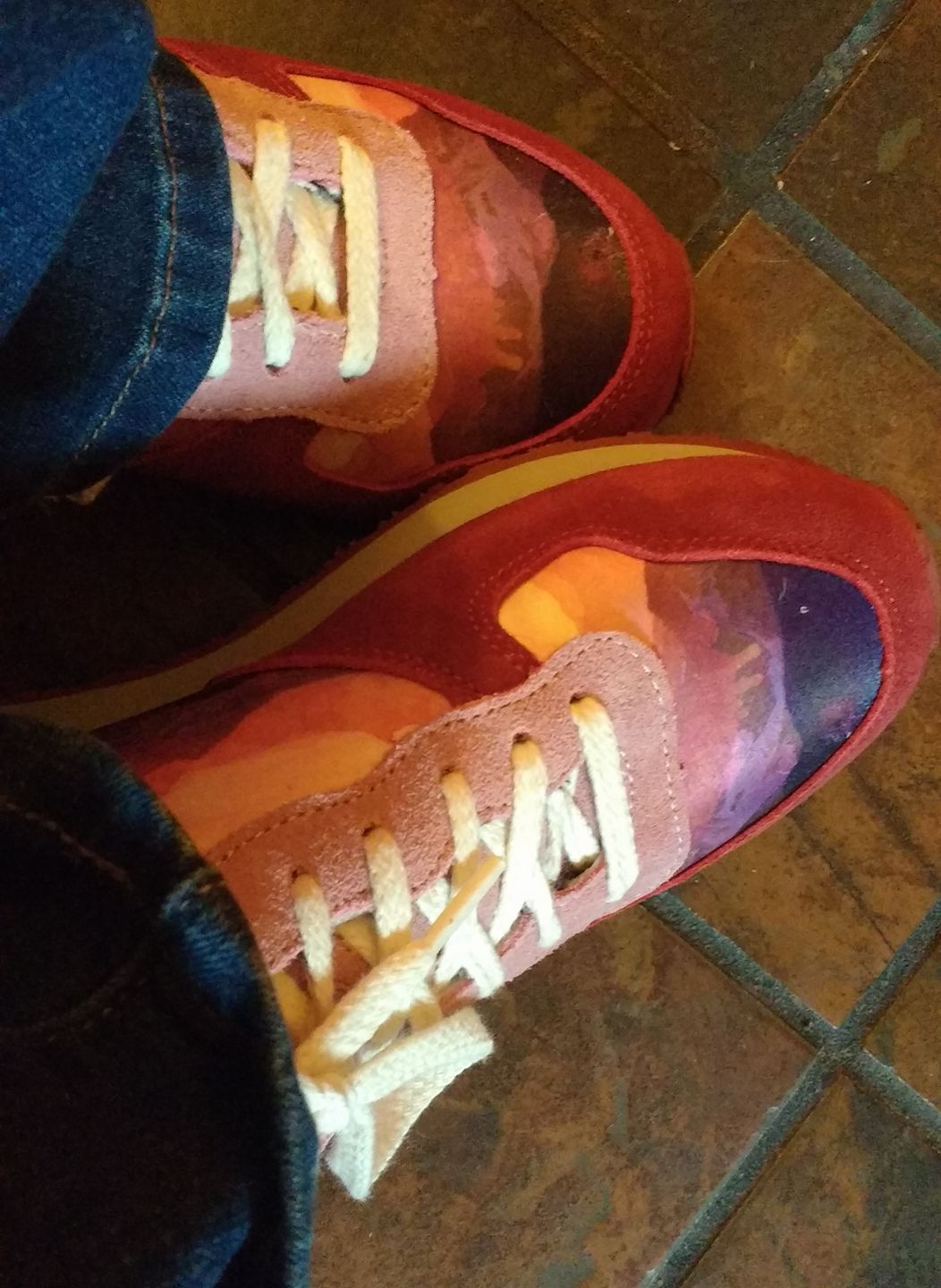 Similarly, Petra spotted this dress at Target and about lost her mind. I almost said no, but then I remembered that my uncle Tim had sent us some money to spend on the kids’ Christmas presents, so I told her it could be her present from Uncle Tim. She’s in love with it. And then we discovered what the sequins do at a certain time of a sunny afternoon in our living room…