So here we are.

Last night, when the first inklings that this might not go so well began to roll in, I turned off my phone and went back to reading Between The World and Me. This should be required reading for every person in our country. Every high school and college should require this book. Everyone should read it and then read it again. Ta-Nehisi Coates is a poet and a prophet. And I cried, because the view through his eyes was so true and so bleak.

A surprise to absolutely no one: I’m devastated at the way this election turned out.

I’m not as surprised as most people seem to be. I remember during the primary, how Trump consistently did better than expected from polls because people were embarrassed to admit to a pollster that they would actually vote for that guy. But in the privacy of the voting booth…I didn’t trust the polls, always mentally giving Trump another 10%.

I keep seeing people talking about how Trump will appoint pro-life Supreme Court justices and stop abortion. You think that? You do? Really? That’s cute. Don’t you remember last spring when someone asked him if he’d ever paid for an abortion for one of his paramours and he refused to answer? Trump will appoint pro-Trump justices, the end. Oh, and PS true fact, abortions are way down under Obama.

When the Billy Bush tapes came out, I thought this was over. How could the good Christian people of this country–still our largest voting block–vote for someone who spoke like that about women?

I feel less safe now, knowing that plenty of people in this country were NOT concerned enough about that to withhold their vote from him. Don’t get me wrong, I didn’t expect them to vote for Clinton. But Gary Johnson, or that McMullin guy, or just stay home in protest. But to fill in the bubble by his name? That’s saying it’s okay. That’s millions of Americans saying it’s okay to discriminate against people based on their religion or the color of their skin or their gender. It’s not Trump who scares me. It’s everyone who said, “That’s just how men are. That’s how guys talk when they’re alone.” That makes me feel nervous.

One of my friends who is an immigrant came over this morning. She told me that she and her husband were up at 3 am trying to figure out when they are going to…I think the Republican term is “self-deport”? She’s a great person, an asset to our city, the kind of immigrant who built this nation. She’s training to become a teacher. She is a deacon in her congregation. She is a good neighbor. We need people like her. She is scared.

I wish I had rehearsal today. My impulse is to respond by connecting with people, by making art, by crying out.

I see lots of people on my Facebook wall today saying, “What do I tell my kids?” It’s a good question. We tell our kids don’t be a bully, be kind to people, look out for the little guy, be humble. And then someone who does none of those things gets to be the most powerful person in our country. So what do we say to them? 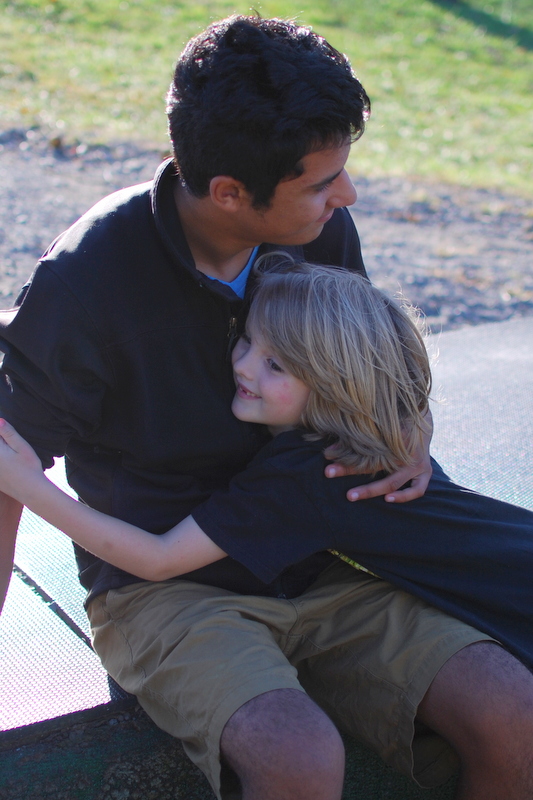 Silas was up all night. We didn’t tell him what was going on with the election results, so it wasn’t anxiety, he just wasn’t sleeping. Unusual for him. This morning, I had to tell him. He’s a mess today. He’s worried about his Mexican-American brother (don’t worry, I say, he’s a citizen, no one can take that from him). He’s worried about his black friend, his immigrant friend, his female friend. What do we say?

We say the things we always say:

Protect the people you can protect.

Act from a place of love. That’s the place where bravery lives, where generosity grows, where God guides.

Reach out your hand.

Never stop reaching out your hand.