I finally am getting around to posting pictures from Petra’s Totoro party. Short version: It was awesome. She was thrilled with every little bit of it. We had good-ish weather (good enough, anyway, that I didn’t have to figure out where to put three dozen people, half of them under 10, in my house). I’ve learned from years past and focused on details that I knew the kids would notice and be excited about, prioritizing them over other touches that none of us had time for.

JC was at a conference for the entire week leading up to the party, and then the morning he got home, he went to the Virginia Mennonite Relief Sale at 2 am to help Peter make some (amazing) pancakes for a few thousand good people…and then slept for about 18 hours. The fact that this party came together at all and we didn’t kill each other in the process is a miracle. I’m beyond astonished, really. But we did a good bit of the work ahead of time, and the kids were big enough to pitch in, kind of.

Before JC left, I helped him tape together some newsprint on our kitchen floor, and he painted a big Totoro.

We were going for this:

And this is what we did with it:

I feel dumb sharing all of these, but we had so many great photos with this backdrop! Some of them didn’t come out as well as I’d hoped–I was having a camera issue–but I still love them. The kids were clearly very happy to have their pictures taken. Some of the kids hadn’t seen the movie, but they didn’t care–it was still fun to stand with what my dad called “the sweet potato cat.”

They came out so cute, and they were super easy to do. 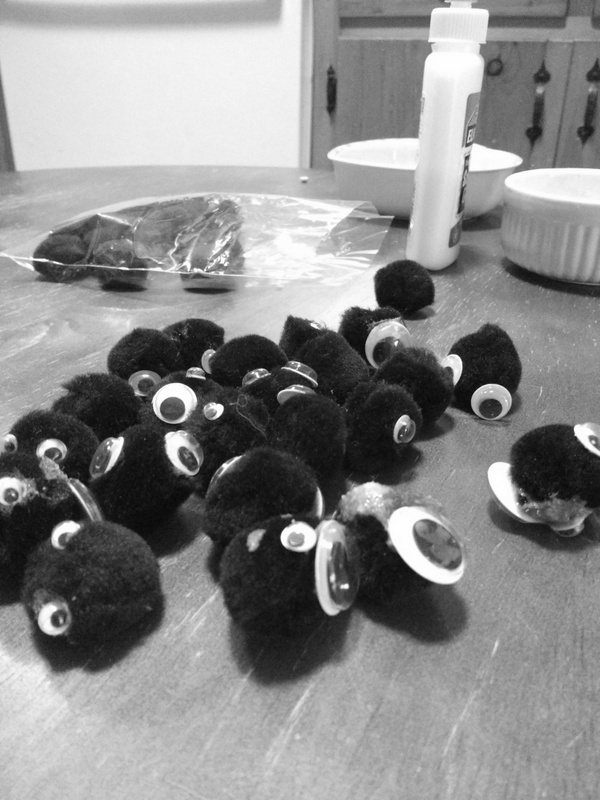 Silas, with some assistance from grandparents, made a banner with Petra’s name on it. Although she thanked him, she told my dad, “Of course, the problem is that my name has only one uppercase letter and four lower case letters, but those are all uppercase!” Everyone’s a critic. 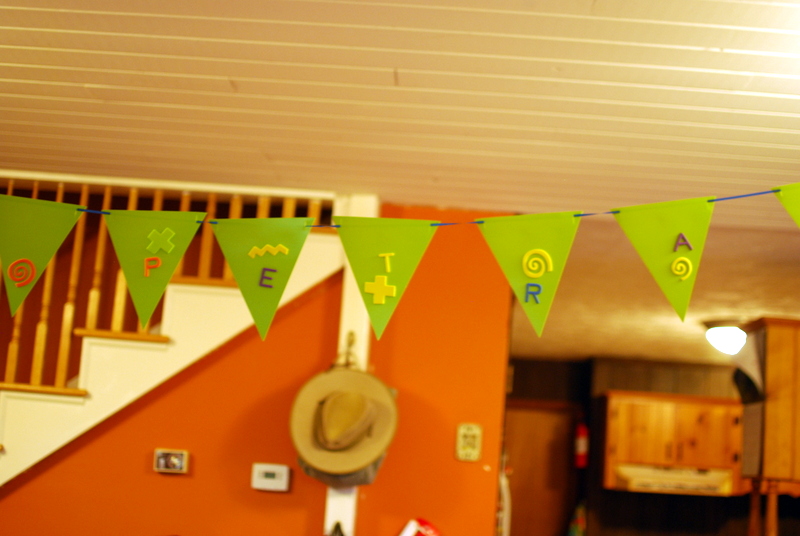 The other big decoration piece was the Catbus. In the movie, Totoro’s transportation is a bus that is a cat that has twelve legs and can fly. Or something. It makes sense in the movie. So after searching high and low for a big box (Myers and Laura had one!), I spray painted it with one hand while pushing Petra in her new swing with the other, and then JC added the details like…an hour before the party. The kids and I thought it looked awesome, although I imagine he had a slightly different vision for it, had we but world enough and time.

Somehow, my kids got the idea that a themed birthday party necessitates costumes. Lucky for me, this year, Silas decided he didn’t actually want to dress up like a character from the movie. But he was in the extreme minority.

I also decided to provide a craft station. We put out homemade playdough as well as materials to make toilet paper tube Totoros. They were super cute and easy, and just the right level of opportunity to be creative while being simple enough that even our youngest guests (well, except the baby) could do it.

Tip: Provide smocks! JC had just come back from a tech conference with a bag of free t-shirts, so he was willing to retire some older ones to the craft table.

Even I got into the themed attire action! 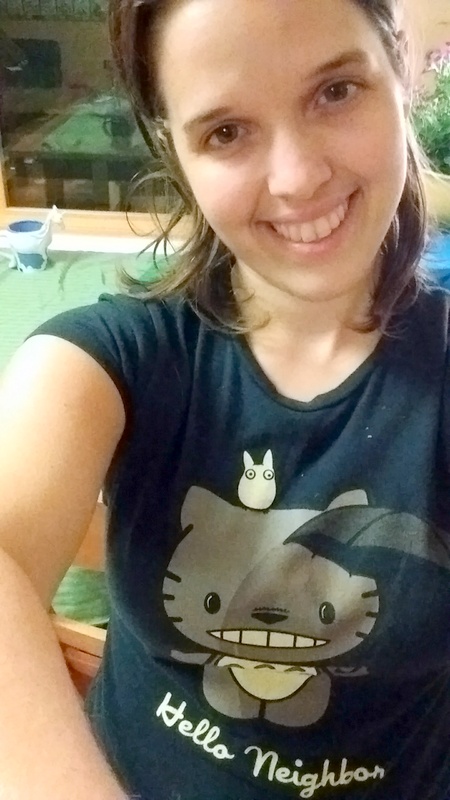 Petra wanted to be Mei, of course. She kept saying, the day of the party, “This is perfect, you see, because I’m four, and in the movie, they say that Mei is four years old.”

So I made a cute little pink dress. I made it to be a bit big so she can grow into it; possibly I went a bit too far on that. But she is thrilled with it, and I’m happy that I’m not going to have to have the argument about retiring it for years.

Petra wasn’t the only one to come dressed up. Lillian decided she was “the middle Totoro,” which is all blue. And then Peter and Bethany’s family showed up, every one of them Totoroed out. Bethany said that the kids decided everyone should costume 20 minutes before they walked out the door, but something that cute could hardly be so thrown together, right? 🙂

One thing I’ve learned about throwing parties for kids is that no one wants to do the planned activities anyway. Last year, I had some games for the Frozen party, and the kids sort of did them to humor me. They were not into them at all, really. So this year, no games! Amuse yourselves, little animals. Surprises and delights seem to find us.

For one thing, Lillian was my party hero. She had noticed some massive leaves at her grandparents’ house and pestered her folks into cutting them down to bring to us. They were the one thing that I didn’t know we needed. One of the cutest parts of the movie is when Totoro is trying to use a leaf as an umbrella, and Satsuki gives him her dad’s instead. As it happened, it rained a very little, and they actually experienced using leaves to keep dry.

Oh and also so cute.

Another random surprise was the giant jug of marbles and almost-marbles that my dad and Robyn brought for the kids’ birthday present. They were such a joy to hold and move around, many of the kids were drawn to them, especially Arthur and Esau. I couldn’t have predicted or planned it, but it added to the fun.

Beyond that, the kids mostly ran around, explored our yard, and played on Petra’s new swing. They were joy in motion.

I attempted, with the food, to be less…gross than last year. I remember standing at the Frozen party and suddenly looking at it all together and thinking, “Oh my, that is A LOT of sugar.” And that was before the pinata. I did better this time! I mostly had veggies and fruits, some of those pinwheel sandwich things from Costco, and then the cake.

Petra was pretty excited about how the cake came out, and that’s all that matters, anyway. 🙂 I got these little figures on Amazon, which she now can play with, so that’s fun.

For party favors, I decorated some blank Chinese takeout boxes, and put plants in them. Totoro is all about the connection with nature and growing things, so it seemed appropriate. Petra wanted pink flowers, and I happened to find some dianthus. 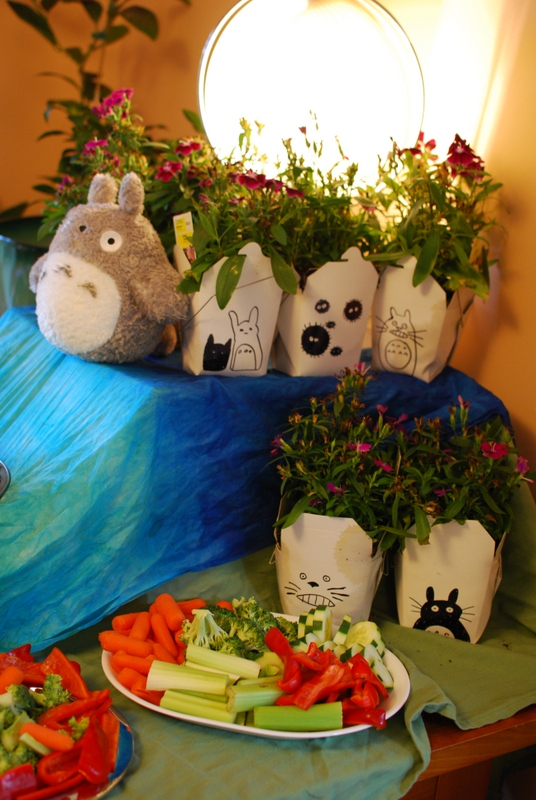 And…that’s all. Another party down. I truly loved doing this one, and when I tucked Petra in that night, she just kept saying, “That was an amazing party.” And it was.