Permission to Live In Space

When I met with Pastor Jennifer yesterday (never have I been so pleased that we have women in ministry!!!), she said many wise things. When I first told her the general outline of the situation: “My stepbrother, who I don’t know very well, and his wife, who I know even less well, have asked me to be a surrogate for them,” I teared up a little. She seemed kind of mystified when she said, “So, why the tears? Why not say no, if you don’t want to do it? Tears are signals, you should pay attention to them.”

So I laid all of it out for her. All the turmoil in my head.
At one point, she said, “Well, do you want to be pregnant again?” It’s a good question. It’s so hard for me to separate the pregnancy from the baby. I definitely do not want another baby to raise! JC and I feel like we barely survived the baby/toddler thing, and we’re enjoying our kids so much more as they get older. I was not one of those women who loved pregnancy, but I didn’t hate it. But part of why I didn’t hate it was the “light at the end of the tunnel” feeling of having the new baby, the prize for the rest of my life. I did really love birth and would be excited to do that again. And then we talked about my babies’ births and how I kind of could have given Silas up within the first month of his life, but had such an immediate and urgent bond with Petra that I would have died if anyone had suggested I do so. How would I know this wouldn’t happen with this hypothetical baby?

Jennifer said, “You can’t know these things. You can’t know if you’ll bond with the baby, or if you’ll have post-partum depression again, or any of that. But you know who YOU are. You know you wouldn’t become someone who would harass the couple, or refuse to give up the baby. You’re not that person.” And she’s right. I can’t imagine being that person.

I love also that she, like me, can live with what is funny about a situation without seeming to discount the seriousness of it. We laughed a lot and I cried an unbelievable amount, but there was so much joy and peace in her presence.

Jennifer asked me if there were places or rituals where I could feel quiet enough to feel God’s voice. In truth, there isn’t. I do have incredible peace and clarity in theaters–in college, I developed the mental habit of leaving my crap outside, and it has continued to serve me well. But that’s more like a break, not like a listening for God space (although I do get to hear my muse nicely). “Maybe I should work on that,” I said.

“Or maybe not. You work so hard on so many things. I think this is one of those situations where you’re working hard enough. God has got to help you out a bit here. God is going to have to open something for you. Don’t work on it,” she said. And the idea that God might have to do much of anything for me, because of this situation, felt strange and almost funny. The way she said it, it was like, God got you into this mess, and He darn well better get you out, or He’ll be hearing from me.

One other thing she said that was so right and helpful and true, was I told her that Natalie had expressed concern about how my faith community would feel about this. “JC says that it’s clear she doesn’t know Mennonites. We have a culture of helping people even when we shouldn’t!”

J took this really seriously, though. “There’s no Mennonite answer to this, and there’s no *Christian* answer to this. There is only the answer that is right for Alisha, in this moment, in the truth of who you are. Don’t look for the Christian answer, you won’t find it. Look for the answer in the person God made when God formed you and in the life God has led you through.” That was a powerful thing.

In addition to praying with me, and promising to pray for me, one thing she said was that I should try to take some space of time–five days, maybe–to live with the decision of “no.” and then take “a brief Sabbath, and live with yes for a few days.” She said that I should be “attentive to feelings of consolation and desolation” in each of those choices. Yes, she actually talks like that. I love her. She also said, “Pay attention to whether you feel driven or drawn.”

So I left her office with that plan, and I felt…more at peace. She was right, by just settling into “no,” I had a bit of peace. The noise in my head got less loud. The weight in my chest was a little lighter, too. I felt legitimately better than I had in five days, as I walked out of there. No, I thought, I don’t have to do this. I can say no to this. There will be family drama about it, but there’s always family drama. This is okay. I can say no. And I listened for the consolation or the desolation.

And here’s what’s crazy. It was hard to live in the no. This is day 2, and I keep sliding to the yes. Does that mean I feel…drawn? Maybe it does.

One thing Pastor J asked me was if there were any scriptures that were speaking to me in this time. In the moment, there were only two things that came to mind. One was Romans 8:28: “And we know that for those who love God all things work together for good, for those who are called according to his purpose.” I haven’t been praying for clarity so much as I’ve been praying that God will adjust the world to make either decision the right one. Jennifer said, “There are lots of weird pregnancy stories all over the Bible, right?” And I had been thinking a bit about Mary (which is, let us be clear, a bit much, even for me). But there is something about a baby coming to be in a not-normal way, and the way a baby can be a gift, and the way that bringing a baby, any baby, into the world is just opening oneself to heartbreak.

After I left, though, I realized that the scriptures that have been most on my mind are the ones about wealth and poverty. It seems like it shouldn’t be relevant, but that’s what was in my mind. So I got out the ol’ concordance and looked up everything Jesus said in teachings about wealth and money and worldly goods. The thing that has been rolling around in my mind unbelievably intensely is the parable about the farmer who has a great harvest and it overflows his barn, so he decides he needs to build a bigger barn and then he can rest and be happy–and then he dies that night (moral: You can’t take it with you). I know that in Jesus’ parables, wealth always means either actual material wealth OR God’s love. And so what does that have to do with whether I can/should have my stepbrother’s baby?

The truth is, I had a famine of friendship for most of my life. Even when I was a little kid, all the way until I was in college or even after, I had a lot of people I would hang out with, but not many who would say I was their best friend (and let’s be clear, as Mindy Kaling says, “Best friend is not a person, it’s a tier.”). I wasn’t in that tier for anyone, for most of my life.

And since I’ve moved to Virginia, I have had an abundance of friendship. The bounty of love I have harvested in this season of my life is truly overflowing the barn. And I can’t take it with me.

I also keep thinking about the parable where the master gives his servants talents and the one who takes it and moves it around in the economy and grows it is the one who is rewarded. I keep thinking, I need to take the vast wealth of love that I’ve been given and move it around and it will only grow.

I haven’t been this turned over and over about a decision since the one time when I nearly didn’t marry JC. It’s so crazy to me now, to think about it. I find myself talking to people about this and saying, “JC says …” or “JC reminded me…” etc. He’s become such a great guy. Pastor J, at the end of our meeting was like, “At least you’ve got this fantastic husband. What a guy!” just because of all the times I referenced him. But I nearly didn’t marry him, and everyone, even his mother, thought I was crazy to do it. His then-undiagnosed mental health problems made him sometimes abusive and generally unpredictable. I don’t know if I’ve ever in my life had so much love and courage as I did the day I married him. Looking back, and knowing how things were then, I can’t believe I went through with it. But I’m so glad that I did. Everyone in my life thought I was crazy, and it took years for them to decide otherwise. For the first two years, I regularly wondered if I had made the worst mistake ever. It was painful. But now I know, I acted from a place of love and courage, and it was the right place to act from.

When I look at this decision, today, I’m seeing the reasons for no, and they feel hollow and selfish. It will be inconvenient, and painful and uncomfortable (physically and emotionally). Everyone I know thinks I’m crazy. But I’ve been here before. This is so like the months before I got married. When I chose love and courage, I chose well. 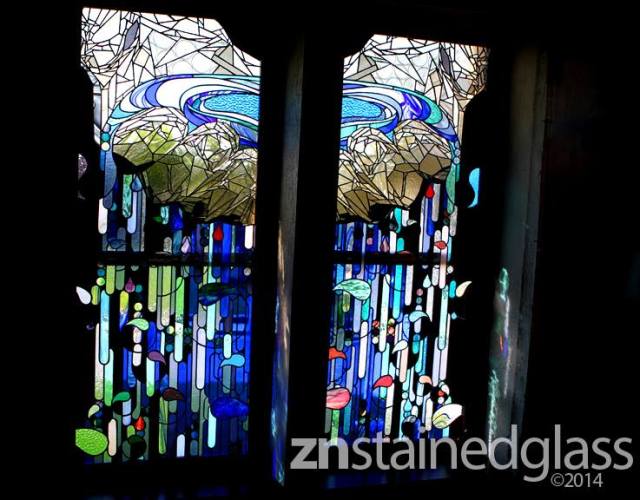 Today, I had some time alone in between two meetings at church. I went into the prayer alcove, where my friend Zac’s gorgeous glass is hidden. I pulled a chair around, and I tried to just be quiet and meditate on this glass. Not living in yes or in no, but just living.

Zac made this window, knowing it was for a prayer alcove, and he decided to have the prayers rising up like bubbles, and the hands of God overflowing with blessings, with peace, with the water of life.

As I looked at it, all I could see was abundance. The abundance of God’s love and the love of my community. JC said, “You know, those friends you have–the ones who would do this for you if you asked–if you do this, they will still be with you. They’ll take care of you and support you. You won’t be alone.” And he’s right.

So if I say yes, it’s from a place of abundance. From having love overflowing and raining down. What a powerful place.