When I was in college, my roomie and her bestie and I went through a modpodge phase. We went through modpodge the way our downstairs neighbors went through PBR. I think it started with one of them getting a sticker from one of those grocery store vending machines and using modpodge to seal it onto a Nalgene bottle (remember those, back in the blissful days when we weren’t freaked out about BPA?).

It expanded into cards (I made birthday cards for my now-sisters-in-law that were rather elaborate and modpodge-based), binders, boxes, and, if I recall correctly, a rather unfortunate incident involving the ceiling in our dorm room…

The kids are in a phase of cutting pictures out of magazines and catalogs OBSESSIVELY. They leave little bits of paper all over the place and freak out if one of their ten million “paper toys” disappears. On the plus side, Silas now cuts nearly as accurately as I do. On the minus side, a bajillion little pieces of paper, some of which have value to the children.

One afternoon, when it was too super cold to go out, I gave them two brie boxes, some modpodge, old paint brushes, catalogs, and scissors. I showed them my Shakespeare box, and they got really excited. They both set to and there was blessed silence for a surprisingly long time. Petra worked on hers for at least an hour.

They were thrilled. I was thrilled. Winning, all around.

The final projects look…well, like a three- and a five-year-old made them. But I don’t care, and neither do they.

Next time, Petra says, she wants to do a big box like mine. So that might be one of her Easter gifts.

And next time we have a fractious afternoon, it’s nice to know that I can pull out my college drug of choice to calm the savage beasties. 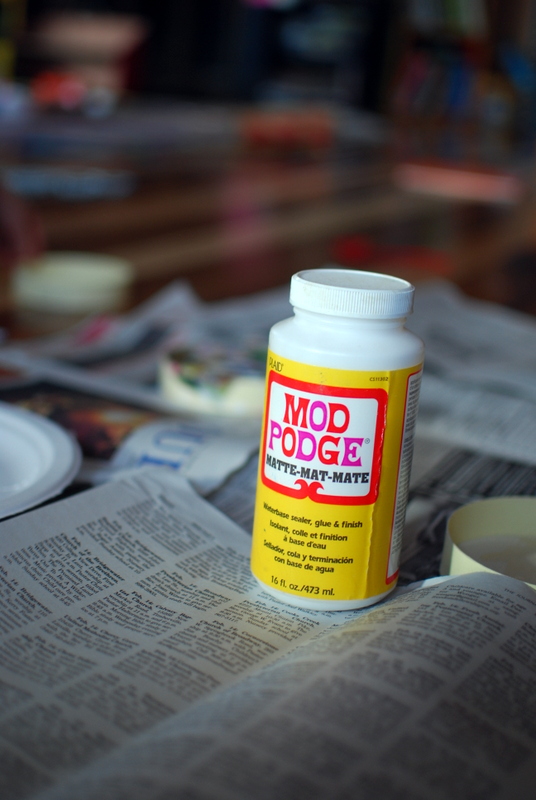