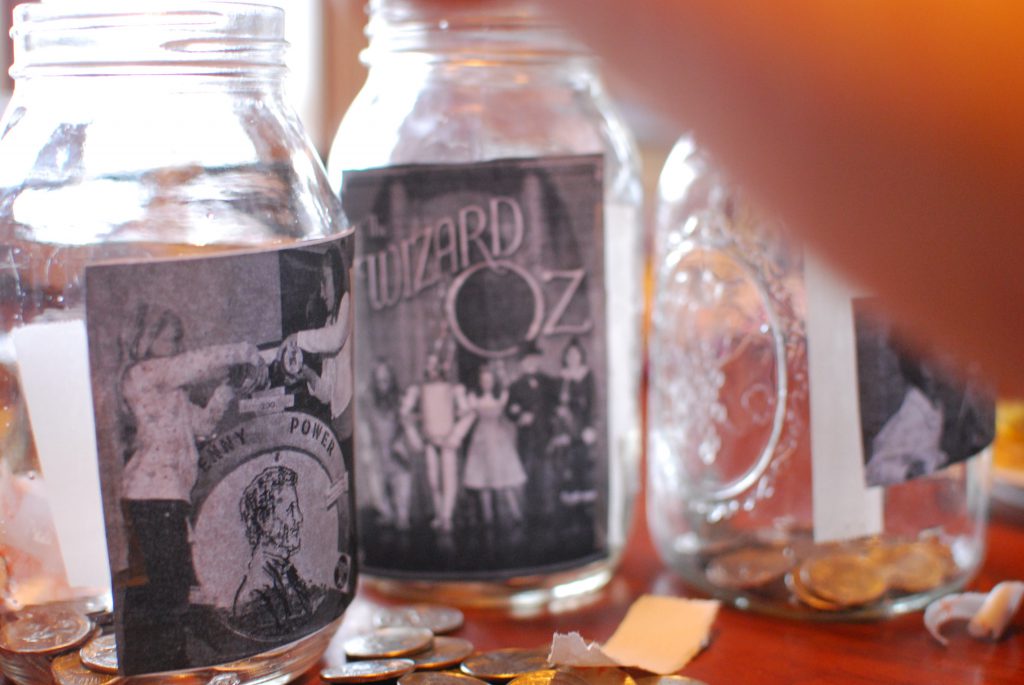 One of the most frequently repeated stories about my childhood is about how I desperately wanted an American Girl doll (Kirsten, specifically), but my horrible parents refused to buy one for me because they were awful (and also didn’t have any money for that kind of thing). So I asked them if I could get an allowance for doing some chores around the house. I think I was six. That year, I doggedly saved up all the money I could earn–not just allowance money, but other things too. We were living in a neighborhood that year–unusual, for my family–and I remember having an art sale on the front of the lawn. We probably had a yard sale at some point, too. At Christmas I made everyone’s presents (and proudly declared, “It didn’t cost a dime!” Let me say again, I was six.).  Finally, around my seventh birthday, I had enough money to order it. And then I learned about shipping and handling. My parents paid for that part as my birthday present.

I don’t know if I was always the kind of person who would save carefully to get what she wanted, or if that experience turned me into that kind of person. I’ve certainly been determined and stubborn since day one, and my children have inherited that trait (because karma). I remember very clearly the sense of pride I had in buying my own American Girl doll. Few of my friends had one, and those who did had received it as a present from their indulgent grandparents. I also learned to be resourceful and try to solve my problems with the resources I had available. Once the doll was acquired, her accessories were prohibitively expensive. My grandma bought some patterns and made her dresses. Grandpa made her a lovely bed and even painted it to look like the one in the catalog. From them I learned that a homemade imitation can be even more special.

One of the healthiest things I’ve managed to bring into adulthood is a healthy attitude toward money. I’m not terribly emotional about it, and lots of people are. Once, Silas asked me what money is, and I told him, “Money is a way to store value,” and that’s all it is.

I credit my parents with helping me develop a relationship with money that lets me see it as a tool, and not something that controls me. I’ve never needed to have a financial makeover. I’ve never been rich, but I’ve also never struggled to live within my means, even when they’ve been pretty limited (ironically, I totally failed the Golding Tightwad/Spendthrift Test as an infant.). I’ve seen so many of my peers struggle and learn hard lessons. It’s hard to watch and hard to think how to help. I want my kids to grow up with a good understanding of money.

I don’t know where to start, or when, but Silas has reached the age of Asking For Things. Money is a complex thing, but I guess it’s never too early to start teaching two basic principles: 1) Money is not unlimited, and 2) If you want money, you probably will have to do things to get it.

He started asking for his own DVD of The Wizard of Oz, because he was annoyed that he had to wait for me to reserve it from the library and then go get it every time he wanted to watch it. After telling him a hundred times that he’d have to wait for his birthday, I finally said, “What if you had your own quarters and you could save up for it? Then you could buy it sooner than your birthday.”

Nanny (JC’s grandmother) had just sent him and Petra $25 each. I asked the bank teller to give it to me in quarters. Then I made three jars. 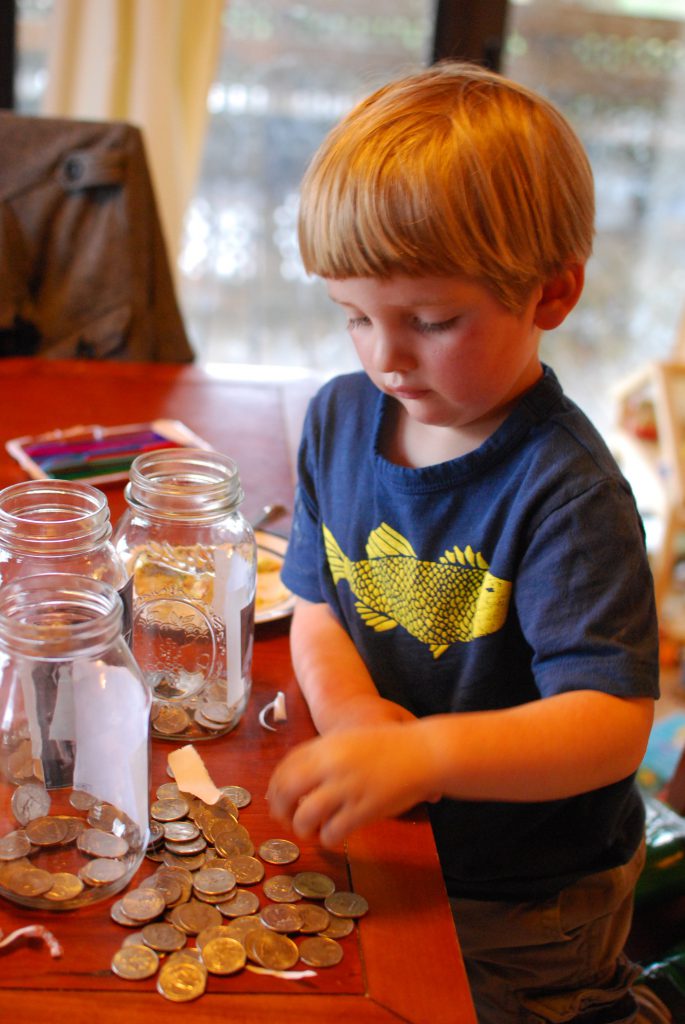 Silas helped me divide the quarters more or less evenly between them. I put a picture of the cover of The Wizard of Oz on one jar. On another jar, I put a picture of kids donating to the Penny Power jug at church–that’s for giving. The last jar has a picture of kids eating ice cream. That’s the spending jar. I’m a bit neurotic about spending—I’m too much of a saver, and so I miss out on things where, really, I should have just spent the money and not thought twice about it. I want Silas to be a bit less weird about that.

Over the course of the next several weeks, we put quarters in each of the jars for doing different things, like helping me find my glasses or clearing everyone’s plates at the table. Eventually, he had 40 quarters in the saving jar, and he bought his movie.

When we go out, we try to remember to take his “spending jar” money with us. If he wants a muffin, he has to buy it  himself–including talking to the people behind the counter and counting out his quarters.

Silas is intrigued by the coins themselves. He looks at the pictures on them and asks about them. When I told him that each state has its own quarters, he got his map puzzle and started matching them up (New England was frustrating). 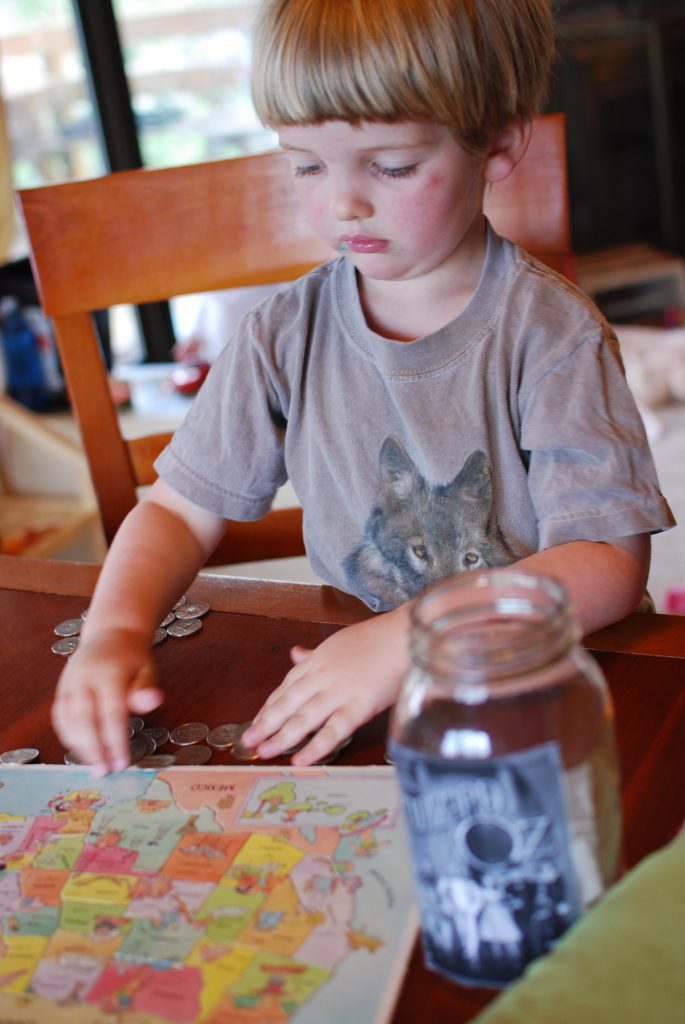 I think he sort of gets it. A bit.

One thing that complicates it is that there are certain things that he just is supposed to do because he’s part of the family and we all do things—like behave nicely, clear his own plate, clean up his toys, etc. We’re not about to pay him for that. But things that go beyond that, we will pay for. Sometimes I tell him that he’s had a great helpful day and I put quarters in his jars for that (but I do it only unexpectedly and rather rarely). He doesn’t get a weekly allowance. I’m trying to tie it closely to things he does, and I immediately put the quarter in his jar. You work, you get paid. Important lesson.

I’m sure he doesn’t understand the “giving” jar at all, probably because we haven’t used it much yet. His Sunday school class puts quarters in a basket that goes to…something (I honestly don’t remember). Our original thought was that we’d put the bulk of his giving jar money in the Penny Power jug, which is a thing our church does in the fall. The various Mennonite congregations in the area collect loose change to support the work of Mennonite Central Committee, doing things like digging wells in areas that don’t have easy access to clean water. I think maybe instead, I’ll take him to donate it to the library. The whole Penny Power –> MCC –> communities across the world thing seems too abstract. I have a friend who works at the library, and I could ask her to make a big deal about using it to buy new books and help him get a more tangible connection between the money he gives and the good it does.

The saving bit has gone to his head, and then some. After his quick success in saving up for one thing he wanted, he set his sights on another. A toy set from a rather expensive catalog…It’s possible to buy the pieces one at a time (which I suggested), but he wants to “spend up for” the whole thing. It’s like…$300. I keep trying to get him to refocus on a less extreme goal, or get it one piece at a time, but he is my kid. And he doesn’t know what numbers are, so the fact that he saved 40 quarters means that it should be a cinch to save 1200. I have no idea what to even say or do to encourage him to a more reasonable goal.

In any case, it’s a good start in understanding how the world works. Let’s hope he learns lessons that will keep him from getting into too much trouble when he’s older.