For Silas’ “China” birthday party, we had some interesting food things… 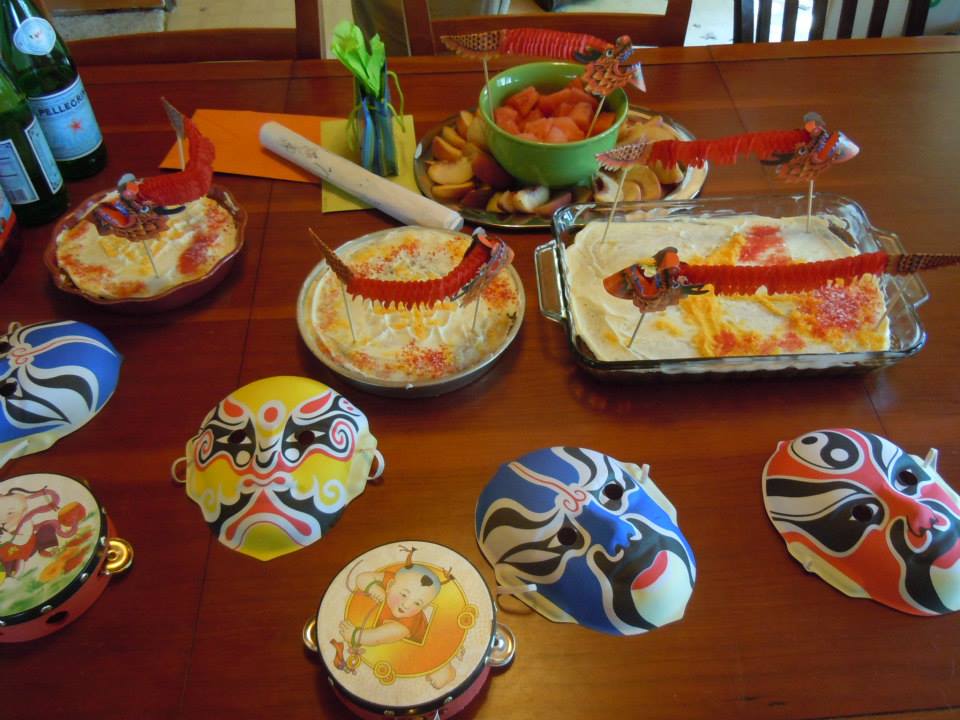 I ordered a bunch of fortune cookies from The Internet–I know that they aren’t really Chinese, but they are fun, and most people associate them with Chinese food. I also went to the Asian grocery store and got weird things from China, including some strange “jelly candy” and roasted chestnuts.

One of my former coworkers is from China, so I emailed her asking for suggestions. She recommended peaches, because the Monkey King featured prominently in Silas’ ideas about China (he steals the Jade Emperor’s peaches). I added watermelon to that, because we had it in the fridge and also the Monkey King has lots of red and yellow in his costume.

Ming also recommended doing steamed buns. She told me that the Chinese often do them in the shape of a hedgehog (!), and I couldn’t resist trying. Here’s a link she sent me that shows how they are supposed to look. The recipe was hard to figure out, but I found this other one that was clearer. Steaming them was simple and fast, and they were delicious!  I don’t know if I’ve had steamed buns before.

I made three cakes, because we had so many people. I could have gotten away with two, but that’s okay. I just used my fool-proof chocolate cake recipe, which stood up to a considerable amount of fooling (I didn’t have enough cocoa, so I just broke up some chocolate bars…).

I used stencils of Chinese characters and colored sugar to decorate two of them. I sure hope they say what the stencil publisher thinks they do. My Chinese friends will probably read this and just roll their eyes. I think they say “Long life” and “luck,” but they probably say, “Metro station” and “discount.”

The story of why it had to be a phoenix is one that can wait for another post. It’s sort of a long story.