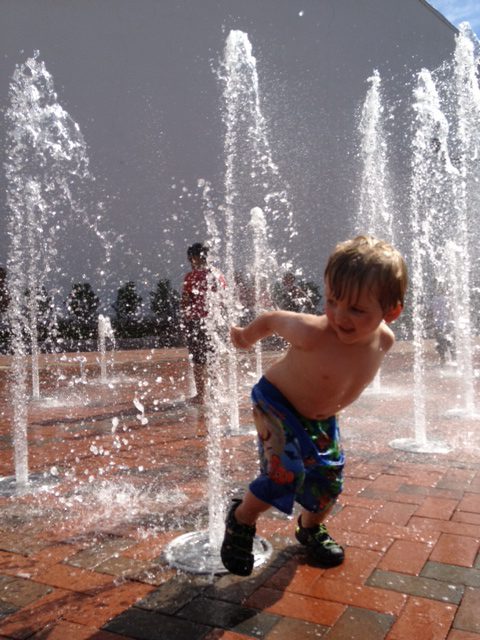 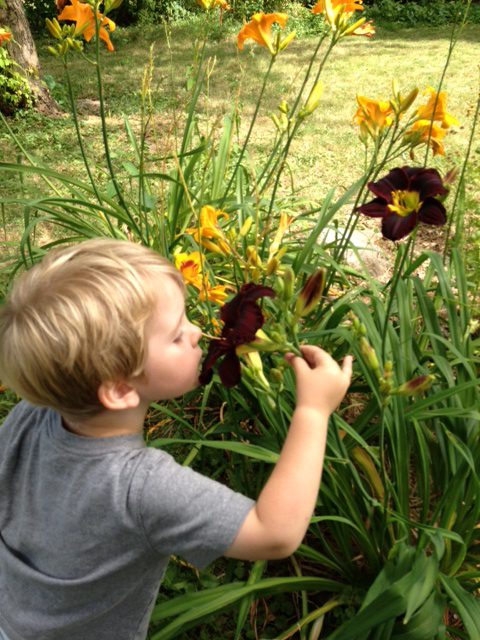 Silas spent last weekend with my mom and step-dad, playing in the new splash fountain and smelling the flowers.

Meanwhile, JC and I were working hard. We’ve been trying to finish the closet in Silas’ room for…I hate to think how long. A long time. Anyway, the closet was done, spackled, painted, and ready to go. Only one problem–we didn’t have a door, and the doorway is a non-standard size. We aren’t good with doors (see also, our bathroom door that, after two years of futzing with it, still doesn’t quite work). We’ve agreed only to buy prehung doors in the future. So what were we going to do about this closet? It absolutely had to have a door, preferably one Silas couldn’t open, because I wanted to store his toys in there when they were “cycled out” (toy rotation is the key to toddler happiness). The toys needed to be out of sight and out of mind.

Then I noticed that our old junk bookcases were almost exactly the right size.

We bought some hinges and casters, and…

We were in a purely functional mode. Also, because of the slanting walls, the door could only open one way. Due to these issues, it’s not exactly a hidden bookcase door. If I told you that one bookcase in my house was a door, you’d be able to find it pretty quickly.

We went with the simplest implementation we could come up with. The bookcase has four swivel casters screwed into the bottom. I read some neat things on the internet about making a latch where you pull on a (fake) book, and it moves some wires and pulls the tongue of a doorknob. That sounds *awesome*. We just wanted to get it done, though. Maybe in the future, we’ll add some latch mechanism, some better masking around the case, make it really hidden.

For now, though, it keeps the toddler out of the toy closet and thereby assists my sanity. The books make the bookcase too heavy for him to move…yet. Maybe when he’s big enough to participate in the engineering, we could do phase 2.