I want to preface this by saying that I AM NOT a Montessori teacher. I haven’t done any of the training. I probably have it all backwards. Everything I know is from books and blogs and occasional visits to Montessori classrooms. I’d really love feedback and corrections from those of my friends who *do* have this training, because I want to know what I’m missing.

So, I started to write this as a comment response to Alice, who is thinking about whether Montessori would be helpful or NOT for her son, who is…four? I think. Forgive me if I have that wrong too. But I had too much to say for a comment. So here we go.

In the past year, I’ve read a couple of books on Montessori, including Montessori from the Start* and Teaching Montessori in the Home, which is apparently out of print. I’ve also read a number of books by Maria Montessori herself, which I found to be far more enlightening. These include Dr. Montessori’s Own Handbook, Secret of Childhood, The Discovery of the Child, and The Absorbent Mind. I also follow a number of blogs by moms who are or were Montessori teachers, including Vibrant Wanderings, Peaceful Parenting, and (my favorite!) Sew Liberated.

From these sources, I’ve gleaned the following basic principles:

Follow the child. This is the one that has probably had the most influence on me. It doesn’t mean that you just let your kid do whatever he wants. But it does mean that you pay attention to what he is communicating to you, both deliberate communications and involuntary ones. One of the really interesting stories I read in one of Montessori’s own books (I think it was Secret of Childhood, but I’m not sure) was the story of how she came up with the cylinder blocks that are a popular material. She saw a child be reprimanded for constantly taking the stopper in and out of his mother’s delicate glass perfume bottle. She realized that there was something about that motion of in-and-out that the child really NEEDED to do right at that point in his development. So she developed these knobbed cylinders that fit in slots, and then used the child’s in-born fascination with that in-and-out to create a material that develops his sense of observation.

This brings us to #2: Teach attention. Many of the Montessori activities teach children to find and enjoy that state of total concentration that some of us call a “book coma” or “flow.” This is not done by a teacher constantly saying, “Eyes on your paper! Stop fidgeting!” The idea is that, if you present a child with the right thing that will perfectly meet their developmental moment, they will be totally entranced. It sounds crazy, but I first experienced it when Silas was six months old. A number of sources suggested offering him a basket of five or six real-world objects to explore (not toys). 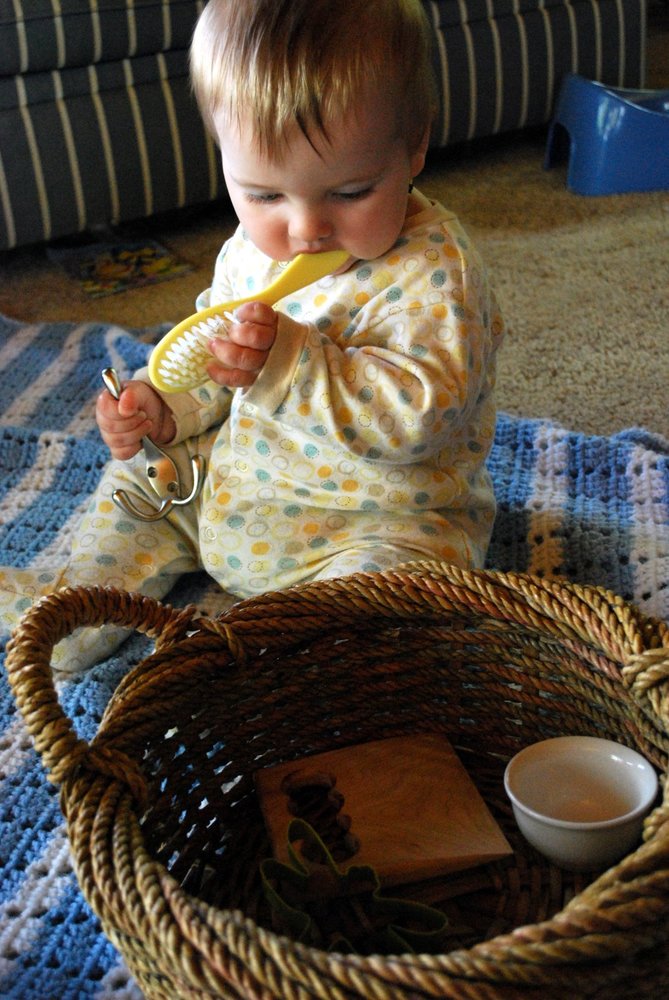 He spent forty minutes doing this. Not kidding.

#3: Stop interrupting! We spend a lot of time entertaining kids and distracting them. We have a lot of things that light up and get their attention. We also spend a lot of time saying “NO!” and taking stuff out of their hands or mouths. If we set up safe spaces where they can explore and stop trying to direct their exploration, they manage themselves surprisingly well. In our house, most of the spaces are really toddler-proofed. We have baby latches on exactly two cupboards–the rest, Silas is allowed to explore. He spends a lot of time exploring (which is how I get anything done).

#4: Tolerate mess and danger (to a certain extent)… When Silas explores in our house, he makes a mess. He loves to take all the lids for our food storage containers out of the drawer where they live and scatter them on the floor. This has been superfuntimes since he was first able to pull up on his own. I always let him do it and then when he loses interest and starts to wander away, I get his attention and ask him to help me put them away. He practically never participates…but a few months ago, he was messing with them, and then I turned around and he had put them all back, without my saying anything. Today, when I went to pick him up from the church nursery, the volunteer in there said that he had spent most of his time taking a bunch of plastic food, one item at a time, out of a drawer…and then he put it all back without being asked. “I’ve never seen a kid that age do that,” she said. Also, when he spills water (about thirty-seven times per day), I try to enlist his help in cleaning it up. I really need to add some spill cloths to his cupboard that has all his stuff in it, so he can do this on his own…just one more thing on the to-do list. We also let him use breakable dishes (so he learns to be careful with things) and plan to teach him to do things like slice his own bananas in a few months.

#5: …but limit mess and danger, too! We obviously don’t leave rat poison around. We don’t give Silas anything that we would be really upset if it broke (thus, the DSLR…he has not touched). When I give him water in a non-sippy cup, I give him only a tiny bit at a time (and I still use a sippy for milk or juice because I get cranky about having to clean it up all the time). We also limit mess by having only a small selection of toys out at a time. This keeps the toys interesting and also prevents him from entirely covering his playspace with them.

#6: Prepare the environment. I guess that’s what this all boils down to. You set up an environment that will meet the child’s needs and guide his exploration. The materials have what’s called “control of error,” which means, if something is done “wrong,” it’s immediately apparent. The child doesn’t need to wait for the teacher to come by with a red pen. The materials tell the child that they aren’t working correctly. A good example of this is a puzzle. If you have one piece left, you’re not done yet. You have something in the wrong spot. You don’t need anyone to tell you this. One misconception about Montessori is that it’s self-directed. It is…but it isn’t. It’s sort of environment-directed. Materials-directed. The teacher or parent prepares the environment in such a way that it guides the child’s learning. I guess what I’m saying is, it’s not a free-for-all (and I’m mentioning this in particular response to what Alice said about how self-directed learning would either be the best or worst thing for her son, and she’s not quite sure which).

#7: Don’t give the mind anything the hand isn’t ready for, and vice versa. There is a better quote about this somewhere, and I’m too lazy to look for it. The idea is that everything you do with your mind has some expression in the physical world, and you had better have hands that are prepared to do that expression. So, a lot of the Montessori activities, like transferring things with tongs from one container to another, are designed to cultivate hand strength and fine motor skills. I actually remember being terrifically frustrated in late elementary school–and HATING writing–because my hands didn’t write fast enough to keep up with my thoughts. I understand exactly what the dexterity exercises are about!

#8 Respect and cultivate the child’s love of order. It’s sort of hard to see right now, in this toddler time, but children do have a sense of order. Silas adores routine, and he gets pretty out of sorts if the basic rhythm of his day is disrupted. By cultivating that sense of order early, you can help your kid form habits of mind that will serve him later. One example that I love is how lots of the activities are structured so that the child does them left to right–the same order that is instinctive to those of us who are literate. Even if it’s not a reading activity, it prepares them for reading. Another example is something I’m working on right now with Silas, which is called one-to-one correspondence. This is the first foundation of math, essentially the thing that lets us count objects, assigning one number to each object. To help create that habit of mind, I give him twelve small objects (puff balls, puzzle pieces, whatever) and a muffin tin and show him how to put one in each of the twelve muffin cups. Then I take them out and give them to him. He hasn’t yet managed to do what he has just seen me do (he is, after all, only 19 months old!), but he knows, when he runs out of pieces and still has three cups left, that he wants to try again. He wants the thing to be orderly, he just can’t figure out how to make it happen.

#9 Teach me to do it myself! This is the other big one for me. Children long for a certain kind of independence. They want to do things on their own. They want to feel competent. I believe (and I think that this is in keeping with the Montessori ideas) that a child develops self-worth through trying challenging things and achieving them–not through people saying, “You’re so great! Yay! Here’s a trophy!” Self-care is a major area where learning to do it oneself is beneficial for the child (and ultimately, for the parent!). Silas is still too little to have complete management over any area of self-care, but he’s getting there. We break down things like getting dressed or washing one’s face or hands into small steps, and he can do parts of each task by himself. We also take turns with things–so he brushes his teeth first, and then lets me have a turn. At dinner, he has a napkin and wipes his own mouth (and does an awful job of it, but…). He’s nearly potty-independent. In a lot of cases, he’s just limited by being short–at 32″, he’s in the 10th percentile for his age, so he can’t get up on the toilet by himself, even with a step stool (and he is SO over the “little potty”). All that will come, though. We’re teaching him what he can do at his age.

All of this is to say, this is what’s working for us, right now. It doesn’t always go well. Some days we spend half an hour watching puppy videos on YouTube, which is enough to send me straight to Montessori hell. Contrary to popular belief, I do not think that Silas was born with a particularly mellow temperament. If anything, he was and is on the high-needs end of the spectrum. I’m really glad that I found this way of teaching him to focus and to enjoy his alone time, because otherwise, I’m sure that he would be driving me 100% crazy by now (instead of, say, 75%).

*Montessori from the Start is really good and all, but it’s very black-and-white and orthodox. Also, it has some stuff to say about weaning, co-sleeping, and babywearing that I find totally ridiculous. It’s mostly for birth-to-three. I’ve heard great things about How to Raise an Amazing Child the Montessori Way, but haven’t read it because the title and cover are sort of embarrassing.